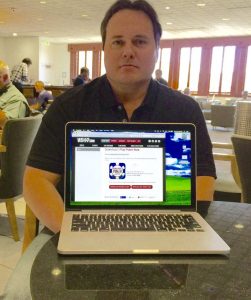 Rich Muny of the Poker Players Alliance urges poker players to get a hold of their lawmakers during August. (Image: twitter.com)

The Poker Players Alliance suggests now is a great time for poker players to contact their lawmakers. The United States Congress has already begun its seven-week break. That means lawmakers are at home with their families instead of busy fighting about the country in Washington D.C.

As it stands, only three states have licensed, regulated online poker sites. Many other states have attempted to take that leap of faith but to no avail, at this time. Lobbyists such as Sheldon Adelson are doing everything in their power to get online poker banned nationwide.

In a recent post at PokerPlayersAlliance.com, Rich Muny, the VP of Player Relations for the PPA, explained why now is the time to take action.

“With these lawmakers at home, it is easier to meet with them to discuss issues like H.R. 707 and S. 1668, Sheldon Adelson’s online poker ban bills. You can meet your elected representatives at their local offices, at state fairs, at town halls, and many other venues. Simply check lawmakers’ social media for events, or just call their office and ask,” he penned.

The Poker Players Alliance has long fought for the rights of poker players. Many politicians either refuse to pass proposed legislation or speak out in favor of making it illegal to play poker anywhere in the United States. Individual states have a right to decide, but folks such as Adelson want the federal government to make it illegal.

How to Win the Fight

Poker is a legal game in the United States. But, due to political reasons, it is only legal to operate an online poker site in three states (Delaware, New Jersey, and Nevada).

The PPA’s fight is a difficult task because it has to battle against Adelson, an influential billionaire. Adelson has more money than the PPA, but Muny suggests the fight can be won and that the PPA has a distinct advantage.

“Another critical factor to winning the poker fight is through your financial support. We may have a billionaire fighting us, but the numbers are on our side. If you can make even a small contribution to PPA, you can help ensure our ability as a community to continue taking the fight to Adelson and his minions on Capitol Hill,” he advised poker players.

There are more individuals fighting to legalize online poker than those who are on Adelson’s side. But, like most laws in this country, money plays a factor.

It is possible online poker will be legalized and launched in Pennsylvania in 2017, but there is no guarantee. California poker players continue the quest towards legislation but the fight continues to face tough opposition. For now, the PPA is advising poker players to continue speaking out in favor of online poker legislation. That’s all anyone can do at this point.