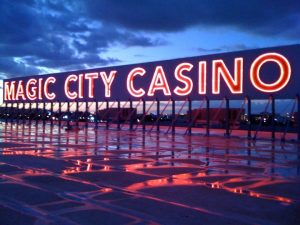 Magic City Casino patrons in Miami, Florida were left in shock after a suspected knife fight took place just outside the poker room, involving a drunk player and an off-duty cop. (Image: croquetapalooza.com)

A Magic City Casino Miami-based poker player was shot and injured recently, after he resisted arrest inside the gaming property.

The man, who hasn’t been named by police, reportedly became violent and aggressive after he was asked to leave the poker room for being drunk. Not taking kindly to the request, he refused to move and staff at the casino were forced to ask an off-duty police officer for assistance.

The officer, who was wearing his uniform at the time, went to the aid of casino staff and, according to witnesses, approached the man just outside the poker room. A short while later, the man was seen throwing money at the officer before a heated exchange of words took place.

Despite knowing he was dealing with a member of the local police force, the poker player engaged in a physical struggle with the officer. While on the floor, the two men exchanged blows and at some point during the fight, the poker player is alleged to have cut the officer’s face with an unidentified object.

Fearing for his own safety and that of the public, the officer fired at and hit the man. At this point, customers fled the scene while the officer was finally able to subdue the culprit.

“He was fighting the officer. He was hitting the officer. They were on the floor. Then I heard someone yell ‘knife’ and a shot went off,” George Davila told CBS4. It’s unclear if Davila was a poker patron, works in the room, or was simply passing by when it all went down.

After more uniformed officers arrived on scene, the two men were taken to the local hospital where the officer was later released after receiving stitches to the wounds on his face. As for the poker player who was shot, he was taken into surgery, where the doctors performed an operation to close up the bullet wound he suffered during the incident.

As yet, an official police report hasn’t been released, but it’s understood that the man is in a stable condition in the hospital and will be charged at a later date.

Meanwhile, the president of the Miami police union, Javier Ortiz, reiterated that the officer discharged his weapon in order to protect his and the public’s safety. He expressed his relief that the officer wasn’t mortally wounded after the incident, and will be okay.