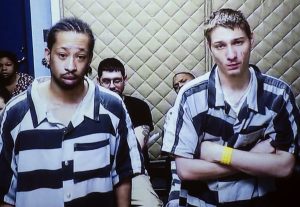 A Michigan poker player who shot a man dead during a home game robbery will not face criminal charges, after a prosecutor ruled it was justifiable homicide this week.

Ramon Vasquez, 25, was killed during a masked home invasion in March 11, during which he and an accomplice, Jason McGowan, attempted to rob a home poker game in Saginaw County.

Also arrested in connection with the robbery were Christopher Talkington and Jesse Bobain.

Bobain was understood to have been one of the players in the game, and was shot multiple times but survived; Talkington, meanwhile, was believed to have been in the apartment at the time but was not playing poker.

Each of the defendants are charged with armed robbery, conspiring to commit that crime, and two firearm offenses and face a maximum sentence of life in prison.

Saginaw County Prosecutor John McColgan said this week that either Vasquez or McGowan had fired a shot after entering the building, and another unnamed individual, who according to McColgan had a concealed weapons permit, returned fire, killing Vasquez.

McColgan said the justifiable homicide ruling came following “a thorough review of all the evidence, including witness statements and forensic evidence.”

Despite the violence of the robbery, this was no high-stakes game, according to Police Chief Don Pussehl Jr.

“They were individuals in their late 20s and early 30s,” he said Pussehl said. “It’s not a real high or real extreme dollar amount, the buy-in was minimal, not thousands. It wasn’t nickel and dime, either, but it wasn’t exorbitant.”

The incident is just one of a spate of recent home game robberies across North America.

Only last month, the 38-year-old host of a poker game in New Castle, PA was shot three times in the pelvis has he tried to defend himself against a masked man who had invaded his regular Sunday night game.

In April a woman was shot in the head following an attempted robbery in Dryridge, KY.

Two adults and three juveniles have been arrested in connection with the robbery in which they got away with $20.

According to police reports, two of the robbers held four poker players at gunpoint while their accomplices searched the house.

The woman was shot while attempting to flee from one of the upstairs bedrooms, although the wound was not life-threatening. Another woman was pepper-sprayed after attempting to fight off the robbers.

In 2011, the day after Black Friday, poker player Kearn Nedd was killed trying to protect others from armed robbers at an underground poker tournament in Brampton, Ontario.

It’s not just criminals robbing home games, you also have to fear the police. They come in like jack-booted thugs and steal all the money from the players…of course they say they are taking it as “evidence”.