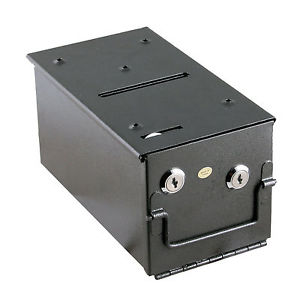 Poker players are always looking for an edge, but one man appears to have found a novel way to recoup his losses after a cash box fell on his foot.

According to a lawsuit filed at Rockingham County Superior Court, Justyn Tyndaal is claiming damages after a cash box used to hold casino chips hit his foot and caused serious injuries.

The incident took place at Rockingham Park’s poker room during one of its daily tournaments. Tyndaal was taking part in the tournament when the box came loose somehow and struck him.

Following the impact, Tyndaal claims he suffered “severe pain” and has witnesses to back up his version of events.

To make matters worse, according to the lawsuit, Tyndaal has since suffered loss of earnings, emotional distress, partial disability and disfigurement.

The end result, says Tyndaal, is a string of medical expenses and the potential for further discomfort in the future thanks to the “serious and permanent injuries” he’s suffered.

Despite the average cash box measuring no more than six inches, Tyndaal’s attorney Francis Caruso III is pushing for a jury trial and a financial settlement to cover the poker player’s expenses.

As yet the general manager of Rockingham Gaming LLC, the company in charge of the poker room, hasn’t received any paperwork and won’t comment on the issue further.

Whether or not the extent of Tyndaal’s injuries justifies compensation is for a judge to decide, but if he’s using it as a way to earn back his tournament entry fee then he may have made a wrong move.

Stories of poker players taking on casinos in court rarely work out well. Phil Ivey is still famously fighting Atlantic City’s Borgata for $9.6 million and it doesn’t look as though he’s getting anywhere fast.

Similarly, the players involved in the Borgata “chipgate” scandal were unsuccessful in their lawsuit. After counterfeit chips were discovered in the Borgata Poker Open, play was stopped and players were forced to take an ICM payout.

For them, that wasn’t good enough so they took the case to court. Unfortunately, a judge didn’t agree and the case was dismissed.

While the players in the above cases might have a slightly different angle to Tyndaal, it does seem to suggest that the house always finds a way to win.