Jose Canseco is hoping to hit a home run as a star in the upcoming “interactive” show at Caesars Palace, “Renegades,” which begins later this month and promises an up-close and personal experience between athletes and audience where, according to Caesars.com, “nothing is off-limits.” 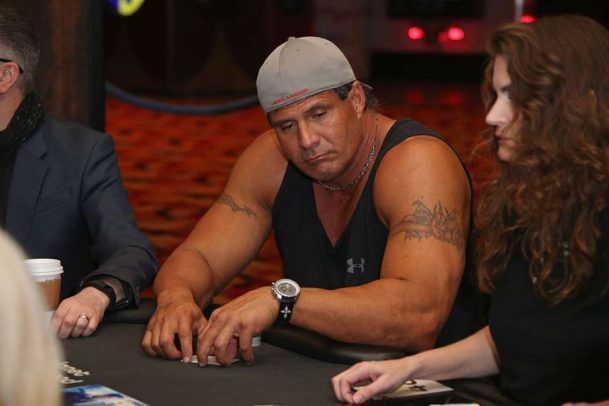 The former slugger, who has taken his competitive nature to the poker tables since retiring from baseball, will be joined by other world-class athletes on stage.

The show opens at Cleopatra’s Barge, a cozy 180-seat theater at Caesars Palace, and will be hosted by Funny or Die comedian Martin Montana, as three not-quite-washed-up athletes share previously unheard tales and possibly sordid anecdotes from bygone glory days.

Canseco’s co-stars in “Renegades” will include 1980s Chicago Bears quarterback Jim McMahon, Jimmy King of the 1992-93 University of Michigan “Fab Five,” and 1990s NFL baller (and six-time NFL Pro Bowler) Terrell Owens. King will share the stage for the first eight shows, with Owens taking his spot for the final six performances.

“You think you know these athletes’ stories, but trust me, you have no idea,” co-producer Rich Lenkov said. “Renegades will offer the a unique entertainment experience, where some of the most infamous names in sports will take you through the highs and lows of their careers in an intimate setting.”

Canseco, the 1988 American League MVP, is as famous for his controversial actions away from the baseball diamond as he was for hitting 462 career home runs and becoming baseball’s first 40/40 Club member in 1988 (40+ homers and 40+ stolen bases).

Those who have sat with him at a poker table in Las Vegas over the past few years have discovered he can be an open book who isn’t afraid to share private stories about former teammates, his past relationship with Madonna, pr his thoughts on steroids and other performance-enhancing drugs.

Canseco is a perfect fit for this role given his candid nature. He once challenged 7’1” NBA star Shaquille O’Neal to a fight, refers to three-time MLB MVP and fellow admitted performance-enhancing-drug user as “bitchtits,” has been known to publicly trash ex-girlfriends after getting dumped, and has shared multiple crazy stories at poker tables, including one about former Oakland teammate Ricky Henderson’s mom, of whom he is not a fan.

As baseball’s “Godfather of Steroids,” he found a modicum of redemption by publicly outing other cheaters in baseball in his 2005 book, “Juiced: Wild Times, Rampant ‘Roids, Smash Hits & How Baseball Got Big.”

Soon after Canseco’s book was released, Major League Baseball implemented a drug testing policy to address public concern. And though many claims in the book have been corroborated, some former big leaguers have challenged his assertions. While there’s no doubt Canseco can entertain, local poker players can confirm that Canseco isn’t afraid to run an ill-timed bluff.

Canseco at the Table

Jose Canseco knocked 462 balls out of the park during his 17-year MLB career but has yet to hit a home run during his recreational poker career.

Canseco has made and blown through millions of dollars living the high-life as a celebrity and now mostly plays low-limit tournaments in Las Vegas at casinos such as Caesars Palace. In the past, he frequented the Aria poker room.

He has just $9,000 in live tournament cashes, though many of the tournaments he competes in are small enough that they don’t necessarily report their results to the Hendon Mob database.

back when people didnt think pro athletes were juicing, ahh the good ole naive days. i can only imagine what drugs poker players on, like adderal or zanax to help try to focus or stay up for long periods of time

When he swung the needle and connected you just knew it was outa there. Back to today, sounds interesting to see who else they cast.

Used to go to Pompano Park Racetrack and see Pete Rose this is about almost 20 years ago, the staff was very nice. Albeit recognizable never saw him get asked for an autograph. Ate at his restaurant in Boca, basic American lightweight menu, nothing special and tv’s all over the place, and at every table, probably the draw. Too bad with Pete and NBHF.

Was distracted and glossed over the part with fellow cast members, duh on me.