Poker Player Springs to Action, Chokes Out Man Who Punched Girlfriend in Face at Venetian

A poker player with a martial arts background took a little time out from the grind to single-handedly break up what was turning into a violent and ugly domestic dispute at the Venetian casino in Las Vegas. 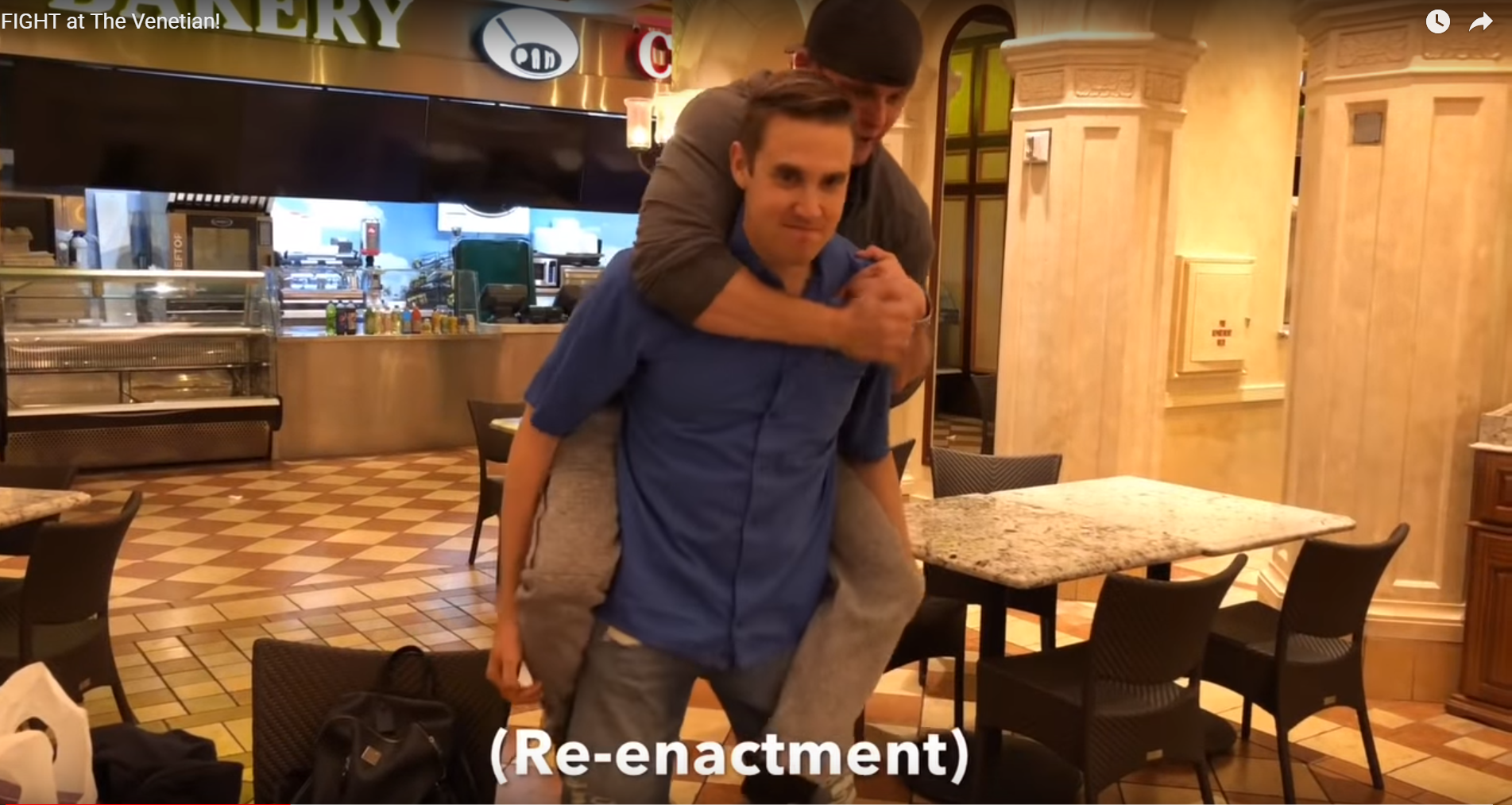 Michael Haag re-enacts the choke hold he put on a man who had punched a woman in the Venetian casino. (Image: YouTube)

Michael Haag says he was taking a little break from the tables after scoring a high-hand bonus. He had just hit a queen-high straight flush in the Venetian poker room for a cool $1,000. But that wasn’t anything close to the most exciting part of his night.

As Haag left the poker room, he witnessed an altercation between a man and a woman at a nearby table, one that started with heated words but quickly escalated.

“She smacks the boyfriend on the shoulder, and he got pretty irate over just that,” Haag said in a subsequent interview with poker vlogger Jeff Boski, who was playing in the same $2/5 game. “So he jumped up, and he cold cocked her — boom, right square in the face.”

Haag says the man didn’t stop there, proceeding to choke the woman and threatening to kill her.

Dumfounded by what he was witnessing, Haag said he searched for any nearby security to handle what was a growing danger.

“I looked around and thought, this is bad. There’s no one else around to protect this girl at all,” said Haag, who was trained in Brazilian jiu jitsu to jump the man from behind and put him in a rear naked choke hold. “I jumped on him like a 200-pound spider monkey.”

Once on his back, he “sett in his hooks” and put the man to sleep without throwing a single punch.

You can see and hear brief flash of the actual altercation by scrolling to 2:37 of the video interview.

When the man came to, he was “irate,” but by that time security was there to restrain him.

Haag says he was worried that his actions would lead to serious repercussions – being 86’ed, or barred from coming back to the casino, or even worse, ending up in handcuffs.

However, those concerns were cast aside when he saw the violence unfolding in front of him.

“I’m not going to let a guy punch a girl in the face and start choking her,” Haag said. “It’s just not going to happen.”

Instead of kicking Haag out, casino management actually thanked him, shaking his hand and treating him to dinner on the house.

While it’s rare for a story like this to come to light, poker players are no strangers to throwing punches. Poker pro Olivier Busquet once fought fellow grinder JC Alvarado for $270,000, while Sorel Mizzi and Brian Rast once faced off to raise money for charity.

From Penitentiary to Poker

It’s a tale of atonement for a man who once spent time in a federal prison.

Haag served three years behind bars on a drug charge, but there was a silver lining. It was during that time that he started studying poker, using his monopoly money winnings as jail currency to buy ramen noodles and cigarettes.

Whatever he learned about the game while locked up has worked out well for him.

Fortunately, he was able to intervene so that the tragedy would not happen. It would have been regrettable if they had not allowed him to play, to help the woman. On the other hand, I think there is always a positive side to all the bad things that happen to us, time in prison was very useful, good for him.

Awesome. It’s a shame his girl was misguided. I saw the same thing once camping out all night in line for concert tickets. Some guy punched out his girl, and 3 guys went and taught him some manners. lol. Everyone cheered.