“Molly’s Game,” a soon-to-be-released film about a “Poker Princess” who ran a private poker room for high rollers and A-list Hollywood celebrities, has been chosen to replace “All the Money in the World,” a movie starring accused sexual predator Kevin Spacey, as the closing night feature at the American Film Institute Festival on Nov. 16. 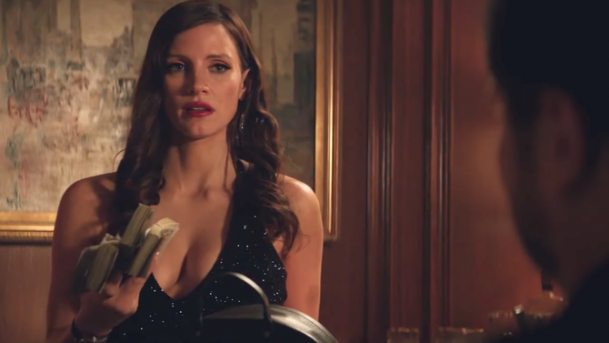 In recent weeks, Hollywood has begun distancing itself from Spacey, the 58-year-old once popular actor who is accused of sexually assaulting more than a dozen men, some of whom were underage at the time of the alleged incidents.

Spacey, the star of Netflix’s hit series “House of Cards” and many blockbuster movies, is currently getting the same treatment from Hollywood as Chris Ferguson and Howard Lederer received from the poker community following the 2011 Black Friday scandal, having lost the respect of his fans and peers.

With Spacey on the outs in Hollywood, the annual AFI Fest needed to find a replacement for one of the screenings on its fifth and final day. They chose “Molly’s Game,” a poker movie directed by Aaron Sorkin, which premiered to positive critical reviews at the Toronto Film Festival in September.

Arguably the most anticipated poker movie since “Rounders” is set to be released in theaters on Christmas Day.

(You can view a trailer for the movie here.)

Sorkin, known for writing the script for numerous blockbuster films such as “A Few Good Men” and “Moneyball,” doesn’t consider “Molly’s Game” a poker movie. But that’s sort of like saying “Rudy,” a true story about an unathletic college student who worked hard to make the Notre Dame football team, isn’t about sports.

“Molly’s Game” portrays the real-life story of Molly Bloom (played by Jessica Chastain), an Olympic-class skier who ran the most exclusive high-stakes poker game in the world, and in doing so became the target of an FBI sting.

The film is an adaptation of Bloom’s memoir, “Molly’s Game: From Hollywood’s Elite to Wall Street’s Billionaire Boys Club, My High-Stakes Adventure in the World of Underground Poker.” Sorkin read the book and believed the tale of high-stakes poker pros, Hollywood celebrities, business tycoons, and Russian mobsters would translate to big-screen success.

Early screenings of Molly’s Game have been overwhelmingly positive. As of Tuesday, the kind-of-sort-of-poker movie had received a cumulative score of 7.2/10 on Rotten Tomatoes, and is approved by 94 percent of the critics who have seen and reviewed the film.

“When Molly’s Game digs into the business of gambling and the whims and vulnerabilities of powerful men who spend mountains of money trying to one-up each other, it is witty, gossipy, and very entertaining.” – Allison Wilmore, BuzzFeed News

Of the 34 critics who have reviewed the flick, only two rated it as “rotten,” meaning the reviewer believes the movie stinks. Perhaps, those two critics don’t like poker. The positive reviews, however, far outweigh the negatives.

“In his overdue directorial debut, Sorkin both entertains and makes you lean in to absorb every detail of this wild tale, which boasts a stellar cast to help tell it.” – Todd McCarthy, Hollywood Reporter

If you don’t have any plans for Christmas, now you do.

I love poker related films. Can’t wait for this one. On the other hand, all this fuss about harassment and sexual assaults (Weinstein and others included) in recent days, left me with ambiguous feelings. Much as I detest people using their position or implied power to reap sexual rewards, I do not comprehend the need to scream “wolf” after decades and long successfull careers. I mean that in any mind the suspicion that the victims did in fact succumb to their molestors in order to advance their careers and net worth back then is rather obvious.
I think that Spacey is a great actor. I like most of his works. If he is a sad little sexual assaulter, he should face the law. He should actually have faced the law years ago, if the allegations are true. In fact, he might even have reached the statute of limitation and walk free. I think that serious matters like that should be addressed timely.
That’s my penny’s worth.