Poker in India Continues to Grow, Thanks to Mobile Boom

Mobile poker in India is on the up according to the latest gaming statistics from Google Play. 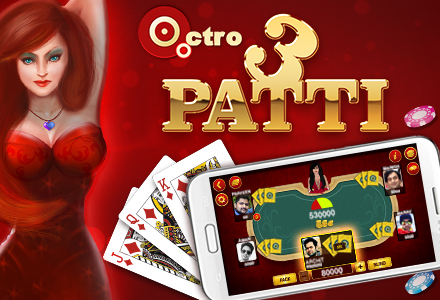 Mobile poker is booming in India as players look to excel in traditional games of skill. (Image: teenpatti.octro.com)

In 2016, India had an estimated 292 million Smartphone users across the country.

Like other money mobile-savvy countries, gaming ranks highly on the list of pastimes for Indian Smartphone users.

However, according to the latest data, traditional favorites like Candy Crush are now making way for card games such as poker.

Outlined in a report by The Economic Times, Indian mobile gamers are now turning to card games where skill dominates.

Among the top ten grossing apps in India this February was Teen Patti (a native version of poker that uses three hole cards).

In fact, as well as three versions of Teen Patti being in the top ten, Zynga Poker was the eighth highest grossing app for February 2017.

This recent upturn in mobile poker activity is a result of two factors according to industry insiders. Being a traditional game, Teen Patti is more socially accepted in India according to Mark Skaggs, co-creator of the popular mobile game, Farmville.

Being a country steeped in tradition, Indians are more likely to gravitate towards games that they have cultural ties with rather than motifs that originate from different countries and civilizations.

“The average Indian is not familiar with King Arthur mythology nor well versed with Hearthstone,” said Ankit Jain, the cofounder of mobile software developer Moonfrog Labs.

Beyond the cultural relevance of games like Teen Patti, Indian gamers are drawn to the skill aspects of card games. Aside from poker, rummy is also popular with players. One app alone, Ace2Three, claims to have more than 7 million users and 20,000 active players per day on its rummy platform.

Such is the country’s love of skill games that Mithun Rebello is planning on launching an online poker school to help teach novices how to play. With more than 10,000 users on his poker portal, Poker High, Rebello is hoping to use this as a base to show Indians that poker can be a “legitimate career and business choice”.

The recent growth of poker both online and on mobile in India certainly seems to be following the same path the game did in the US and Europe back in the beginning. With operators and online academies working to educate players and push the skill aspect of the game, we could soon see a glut of Indian players joining the global poker scene.

Although the marketing strategies of many western facing sites have shifted towards the entertainment aspects of the game in recent years, emerging markets are taking the opposite approach.

In India, at least, this tactic appears to be working as poker is now one of the most popular mobile games in the country.

Add to this a host of recent innovations, such as the Indian Poker Sports League, which will follow a similar format to the Global Poker League, and India certainly looks to be a hotbed for poker at the moment.