77-Year-Old Alex Christoff: Still Dealing After All These Years (Poker, That Is): CardsChat Interview

Looking back through the decades, Alex Christoff worked for Johnny Moss, dined with Benny Binion, and dealt cards to a young Doyle Brunson. Forty-one years later, Christoff still comes to Las Vegas each summer to work at the World Series of Poker. 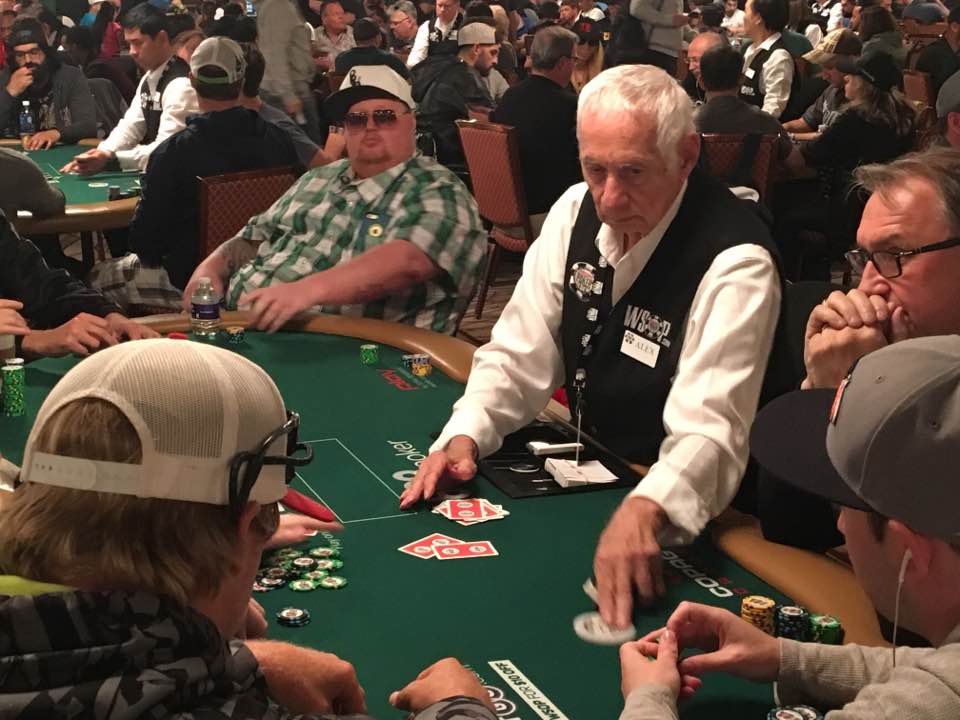 Give him a hand: Alex Christoff, seen here dealing a hand at the 2017 World Series of Poker this week, has no plans to stop anytime soon. (Image: CardsChat exclusive)

The 77-year-old Sandusky, Ohio poker dealer sat down with CardsChat’s Jon Sofen this week to talk poker, the WSOP, and Phil Hellmuth.

Gambling in His Veins

Christoff’s life has revolved around gambling ever since he was a kid. In fact, when I asked him what career path he would have chosen, if not for poker, he couldn’t say.

Who could have ever guessed the World Series of Poker would become as big as it is today? Christoff, although he admits he predicted poker growth years ago, never knew the annual event would turn into a worldwide phenomenon. 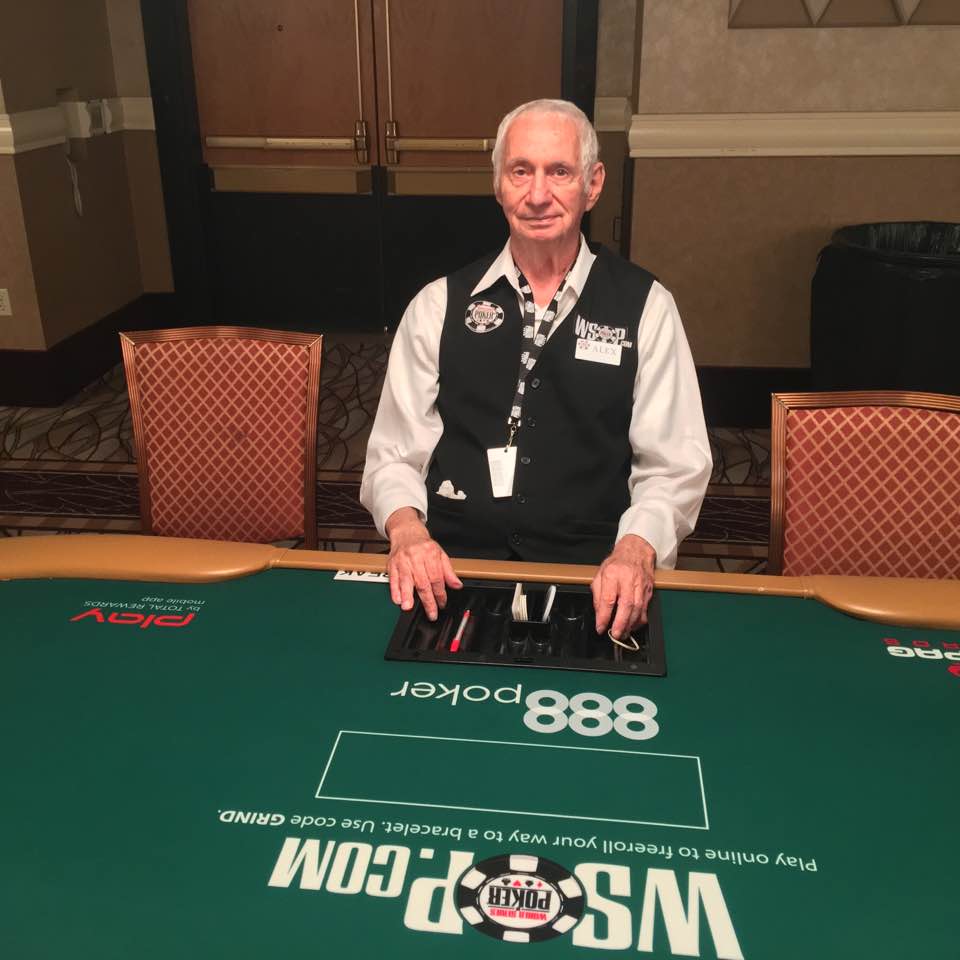 “It’s fantastic what’s happened,” he said. “Poker has always been the stepchild of gaming and still is. But it’s gotten so big that it’s bigger than all the sporting events combined.”

The first WSOP Main Event in 1970 had just seven competitors. Last year, 6,737 players entered what is now the most prestigious poker tournament series in the world. Benny Binion, the founder of the World Series of Poker, would be amazed to see what’s happened to his creation.

He often gambled at Binion’s casino in downtown Las Vegas (the WSOP’s home until 2005 when it moved to the Rio after Harrah’s bought it out). He had lunch a few times with Mr. Binion, and even worked under Moss five times as a dealer.

Las Vegas isn’t the same city it was when the poker veteran first headed out west. The metro area now has nearly 20 times as many residents as it back then. And the town is no longer run by the Mob. Christoff still enjoys Sin City, but he misses the old days.

“This makes more money and produces more volume than ever,” he said about the WSOP. “But, at the same time, like everything else, it’s lost some of its mystique, because now it’s a business.”

The city of Las Vegas has also changed in ways he wishes never happened. In the “old days,” the Mob ran the town but, as Christoff says, “it was a much safer place.”

He spoke highly of Binion’s, claiming the casino served the best prime rib and steak “back in the day.” He said Benny would give away food just to get people in the door to gamble. These days, a meal on the Strip costs an arm and a leg, and corporate America runs the town. What happened to the Las Vegas that Christoff once knew?

“When the bean counters took over, everything went downhill,” he claims.

Gambling is in Christoff’s blood. He loves to play poker, but there’s one game that he finds even more thrilling: craps.

Me, I don’t even know how to play craps. I’ve watched others play many times. They always seem to be having a good time. But I don’t need another addiction, so I’ve decided to stay away from this game. A comment Christoff made, however, might convince me otherwise.

“Craps is more exciting than sex,” he said with a laugh. “It’s stronger than dope.”

He may be sleeping on the couch when he returns to Ohio next month if the wife reads that quote.

Dealing to Hellmuth and Negreanu

When you’ve dealt at the World Series of Poker for so long, you’ve encountered all the legendary players at some point. Which poker celebrity is the most pleasant to have at the table?

“Daniel Negreanu is the absolutely most pleasant. I like Phil Hellmuth, because he’s colorful, not necessarily [because he’s] the most approachable.”

He’s never been treated poorly by the Poker Brat. But he did tell of an epic Hellmuthian meltdown he witnessed years ago.

“Hellmuth was sitting over there,” he said, pointing to the opposite end of the poker table. “It was a typical no-limit hold’em tournament. Hellmuth made a bet, he did a raise, did this, did that. The guy called him all the way down, he either drew out or just beat him. I think he drew out on him. Phil jumped up and did his rigmarole saying, ‘my luck is so bad and blah blah.’

“And he was a very nice young man, probably his first trip to Vegas,” Christoff said. Another player jumped in to escalate the meltdown. “He asked him in a very subdued manner, ‘Mr. Hellmuth, don’t you think the way the man was betting, you should have done something different?’

“‘Mind your own business,” Hellmuth responded. “Don’t tell me what I’m doing. I can’t believe you’re going to say something.’

“‘No, Mr. Hellmuth,” the player fired back. “I don’t mean any offense, but when you saw the three-card flush, why didn’t you do this?’

The Poker Brat flipped out over that comment. He said, ‘now I got a rookie trying to teach me how to play.’

Christoff said Hellmuth is always friendly to dealers, however.

Every poker player knows it’s frowned upon to stiff a dealer. After winning a hand in a cash game, it’s customary to ship a tip, usually a buck. But Christoff says the high-stakes players rarely tip.

Why don’t some of the high-stakes players tip?

“It’s kind of a competitive thing between the professional dealers and the professional players,” he suggests. “They figured that money, if they were playing daily, 70, 80, 100 hours a week, that’s a lot of hands. And if they tipped the dealer every hand that they won, it might be $30,000 at the end of the year.

“It’s terrible. No one wants to deal big limits.”

Except for his summer job, Christoff is retired. He’ll go home to Ohio next month after the Main Event concludes.

He’s dealt cards all over the country, from Las Vegas to Ohio to Iowa. He’s gambled in more casinos than he can count. There doesn’t appear to be anything he’d do differently.

“If I could do it all over again, I would,” he said with a smile, as I told him goodbye.

If you’re visiting Las Vegas this summer, stop on by the Rio and see Alex Christoff. He’s the guy who bears a slight resemblance to former Congressman Ron Paul.

And don’t forget to tip him. He’s earned it.