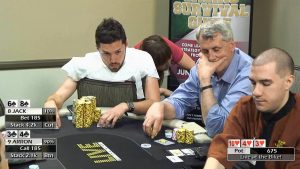 Poker players compete at The Bike in Los Angeles. Poker Central will host ‘Live at the Bike’ starting in April. (Image: YouTube)

Poker Central, the world’s first round-the-clock poker channel, has a new show that will be of interest to cash game grinders, especially those living in Southern California.

‘Poker Central Live at the Bike’, produced by Joker Gaming, LLC, will be the network’s first live show. It will take place at the famous Bicycle Club Casino (dubbed “The Bike”). The first episode airs April 20 at 10:00 p.m ET (4/20 for the stoners out there).

The new show will be centered around cash games at The Bike. This poker room has nearly 200 poker tables and is considered one of the best poker rooms in the country. Sometimes more than 100 cash games are spread on any given day.

Hosts Nichoel Jurgens and Abe “Limon” Hepner will analyze play. The competitors will be a mix of regular grinders at The Bike and guest players. Poker Central hasn’t released any information on the stakes or players competing in each televised cash game.

According to a press release, the 24/7 poker network will host additional original live content in 2016. ‘Poker Central Live at The Bike’ will be the first to hit the airways.

Poker Central launched on streaming devices such as Roku last fall. Most of the programming, at the time, was rebroadcasted. Shows such as High Stakes Poker and Poker After Dark shows that were already available for free on YouTube and elsewhere, comprised the majority of the programming.

When CardsChat spoke with Poker Central CEO Clint Stinchcomb a month after the network’s original launch, he explained that plenty of original content was on the horizon. Thus far, Stinchcomb has delivered.

‘Pokerography’ was the first original series hosted by Poker Central. It launched late in the fall last year. The show chronicles the lives of some of poker’s biggest stars and figures such as Phil Hellmuth, Mike Sexton, Vanessa Selbst, and Antonio Esfandiari.

This summer, the second annual Poker Central Aria Super High Roller Bowl, a $300,000 buy-in tournament in Las Vegas, will air. The tournament will be shown exclusively on Poker Central. Some of the best players in the world will compete for a $5 million first place prize.

Poker Central hasn’t announced the additional original shows that will launch in 2016, but if its current shows are any indication, the poker community will enjoy them.