After last week’s epic million-dollar cash game, “Live at the Bike” decided to give it another go. On Friday night at 6 pm PT, a table full of wealthy and entertaining poker players will compete in a $100/$200/$400 no-limit hold’em game with a $100,000 minimum buy-in. 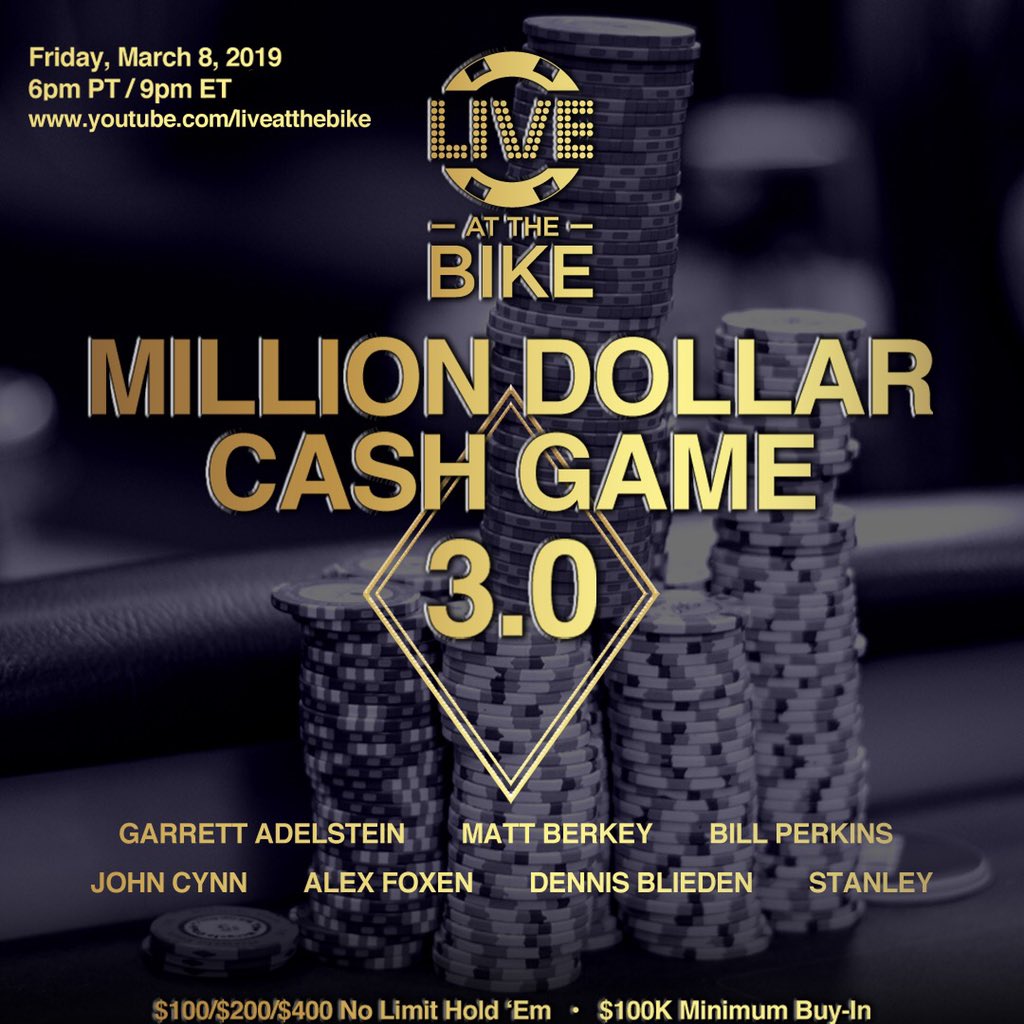 You can catch all the action live on YouTube and Twitch. It’s rare to find a televised or livestreamed poker game this big these days so you might want to tune in.

The minimum buy-in for the game is $100,000 but don’t think for one second players will enter the game with a small stack. Last week, multiple players bought in for over $200,000.

If you like action, this table won’t disappoint. The lineup includes a Los Angeles cash game legend, the reigning world champion, last year’s GPI Player of the Year, a poker coach, and a billionaire.

Garrett Adelstein, of course, wouldn’t miss this game. One of L.A.’s top high-stakes grinders, Adelstein is a regular and fan favorite on “Live at the Bike.”

John Cynn, the 2018 WSOP Main Event champion, is back in the big game for a second straight week. He’ll joined by the reigning GPI POY Alex Foxen, hedge fund manager and high-stakes amateur Bill Perkins, poker coach and pro Matt Berkey, a player who goes by the name “Stanley,” and Dennis Blieden, who recently competed in the US Poker Open and is no stranger to big games such as these.

It’s safe to assume there will be numerous five and potentially six-figure pots during the session. Ryan Feldman, one of the show’s commentators, said on Twitter the game will last for at least eight hours.

Feldman will be joined in the booth by Bart Hanson and Christian Soto.

Last Friday, “Live at the Bike” hosted its second million-dollar cash game. The action was intense but the game’s biggest winner, “Oscar,” isn’t coming back to compete tonight.

Oscar won over $300,000 and baffled his opponents all night. On multiple occasions, he used tiny bet-sizing on the river to induce a raise. In one hand, he bet around 1/70 the size of the pot which induced Blieden to make a huge raise on a bluff that didn’t get through.

Berkey was the game’s biggest loser after walking away from the Bicycle Casino down over $300,000. He was card dead throughout the evening. The good news for him, however, is that things can’t possibly go much worse for him tonight.

Cards will be in the air at 6 pm PT Friday night. You can catch the action in its entirety on the “Live at the Bike” YouTube and Twitch channels.

That was a sick river for Alex Foxen to get with the ACES for the win. Bill Perkins had a set of jacks to lose to aces hitting the set on the river for a big pot. I really felt it for Bill.