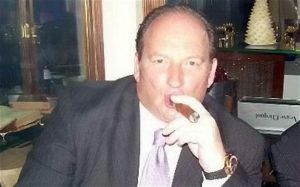 Nigel Goldman pretended to sell rare gold coins on eBay, but when customers paid up the coins failed to materialize. (Image: lawbird.com)

Poker strategy writer Nigel Goldman has been convicted in the UK of swindling eBay customers out of thousands of dollars in a rare coins scam.

Now the author of the book Make a Million from Online Poker may be facing extradition to Spain where he is accused of operating a Ponzi scheme that allegedly bilked investors of millions.

As a poker player, he had enjoyed a modicum of success in the country, once making the final table of the Marbella Classic, although with tournament winnings of just $37,000 over the best part of a decade, it’s reasonable to assume that his “millions” came from sources other than poker.

His book, the title of which, perhaps tellingly, has the ring of a get-rich-quick scheme, is in fact very much a treatise for beginners and is therefore unlikely to result in the aforementioned millions.

Goldman, who changed his name by deed poll to “Howard Del Monte,” will be sentenced at Reading Crown Court on January 8th for two counts of fraud related to the eBay coin scam.

The court heard that he used his knowledge of rare coins to advertise the sale of gold sovereigns and South African krugerrands, which would be paid for but would never arrive.

Meanwhile, in Spain, lawyer Antonio Flores, representing the victims of the alleged investment fraud, has begun extradition proceedings against the author. If extradited and convicted he could face ten years in prison.

“The man is a pathological swindler,” said Flores. “He is narcissistic, incredibly vain, pompous and a criminal. All those things come together.”

Goldman is a former radio personality and food critic who once boasted of counting among his close friends Princess Diana’s former lover, James Hewitt, and Mark Thatcher, the son of former UK Prime Minister Margaret Thatcher.

Goldman has already been sent to prison for fraud, twice, experiences he chronicled in another book, High Stakes: How I Blew £14 million.”

After disappearing from Spain he was tracked down to a modest house a small English village, where he had ditched his trademark red Ferrari for a less ostentatious vehicle. A text sent to his former employer read, simply, “I did not set out to be a thief.”

“The man couldn’t lie straight in bed,” a former associate of Goldman’s told the Birmingham Mail. “He’s incorrigible. But the problem is he’s so bloody likeable. The man could charm the knickers off a Carmelite nun.”

good. ppl that fuck over others for their own benefit deserve the max sentence possible. the only rule I live by is, “treat others the way they treat you.”

I find it funny that he changed his name to ‘ Howard Del Monte ‘ . 3 card monte is a classic street hustler’s con game used to bilk the curious and unsophisticated !