If you’re familiar with Fintan “easywithaces” Hand, it’s likely because you’ve seen his Twitch streams in which he plays poker for his 90,000 followers. Now, the Irish poker player is trying his hand at another game as he takes on other well-known streamers in the second Pogchamps online chess tournament. 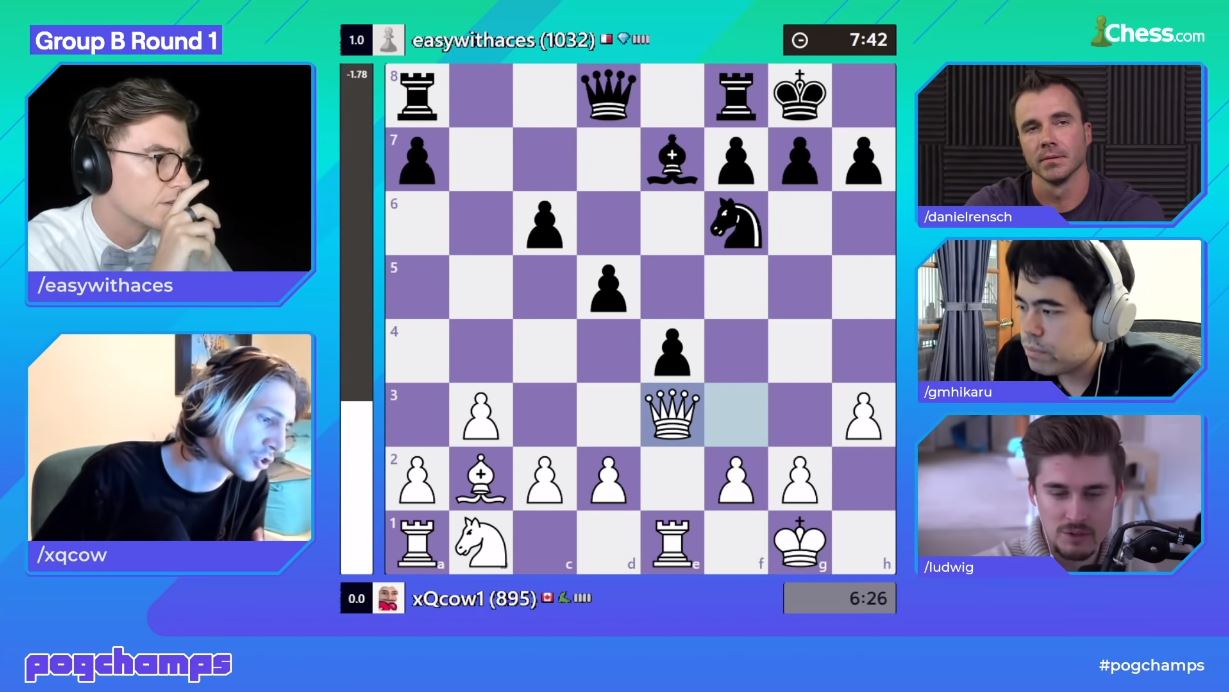 The Chess.com tournament features 16 Twitch streamers from a variety of different arenas, ranging from Fortnite and Hearthstone to politics.

Easywithaces is the only poker player in the mix. Hand serves as a PokerStars ambassador, and won a Spring Championship of Online Poker (SCOOP) title earlier this year. According to his Hendon Mob page, he has also earned $52,009 from live poker tournaments.

While Hand never played chess seriously, doing one crossover with a popular chess streamer began his journey toward Pogchamps.

I did a collaboration stream with Alexandra Botez late last year though, and it’s from that stream that I’m most known for in the chess community,” Hand told the PokerStars Blog. “I played against Alexandra in two games where I had a full board of pieces and she only had her king. I failed to win either time, with both games resulting in a stalemate. If you’ve never played chess, this is the equivalent of your opponent sitting out and you still somehow don’t manage to win.”

Easywithaces won’t have to play against opponents with the experience of Botez – a Woman FIDE Master – in Pogchamps, however. He’s already played his first group stage match, a clash with variety streamer xQc, one of only two veterans of the first Pogchamps tournament who came back for the second edition.

Hand started the first game with the white pieces, and earned a solid position in a Queen’s Gambit Declined. After xQc castled queenside, easywithaces launched an attack, ultimately setting up a mating net that paid off with a win in just 29 moves.

In the second game, easywithaces responded to xQc’s 1. e4 with the Caro-Kann Defense. This time, xQc played solidly, with neither player gaining a large advantage throughout the middlegame. But Hand was happy to exchange off nearly all the pieces to go a pawn up in a queen-and-pawn endgame.

While xQc had the chance to force a draw, he either didn’t see it or chose not to pursue that path, knowing that he needed a win to tie up the match. Ultimately, easywithaces promoted a second queen and scored another checkmate, this time in 36 moves. At one point in the second game, he even changed his streaming scene to what he called the “Moneymaker Lounge” to celebrate his impending victory.

Hand still has a long way to go if he wants to win the second Pogchamps tournament. He’ll play his second group stage game on Wednesday against itshafu, the group favorite who soundly defeated political commentator David Pakman in her first match. Players earn three points for winning a match and zero for losing in regulation; if the match goes to a tiebreaker, the winner gets two points and the loser one.

The top two players in each pool will advance to the Championship Bracket, where the winner stands to earn a $10,000 prize. The bottom two continue on as well, moving to a Consolation Bracket where the top finisher will take home $3,500. Each group stage winner also gets a $1,000 bonus.

While easywithaces knows he’s not the favorite to win Pogchamps, he still wants poker fans to tune in and see him try.

“I’ve got one of the tougher groups, so it’s hard to say how I’ll do,” Hand told PokerStars. “It’s a long shot but I think I have a small chance to win.”