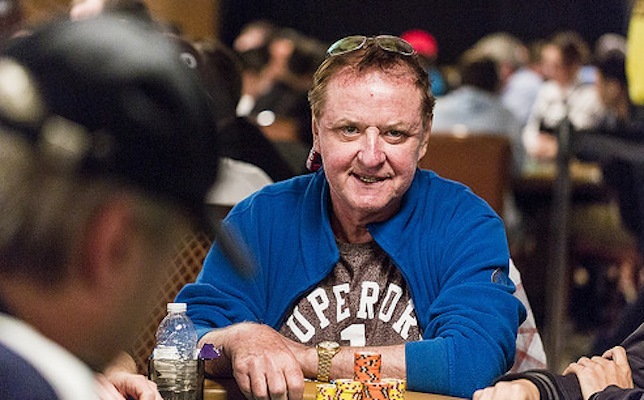 72-year old Pierre Neuville of Belgium could become the oldest WSOP Main Event winner ever, if he can survive the November Nine on ESPN. The experienced poker player has a legitimate shot. (Image: fr.sports. yahoo.com)

If you passed Pierre Neuville on the street, you might not realize you were looking at a man who has achieved incredible things in both business and on the felt. Like many very successful people, he feels no need to be showy or brag about his accomplishments, but they are plentiful.

This Belgian poker player won the 2014 Lifetime Achievement Award at the European Poker Awards, but was still months away from pulling off his most impressive accomplishment. The 72-year old entered the WSOP Main Event this summer as a longshot. Now, he’s one heater away from capturing the $7,680,021 first place prize, along with the coveted gold bracelet.

When play resumes on November 8th at the Rio in Las Vegas, Neuville will have 21,075,000 chips, good for fourth at the final table. His odds to win sit at 6/1, well behind chip leader Joseph McKeehen (7/5), but this is poker, where anything can happen.

One heater. One 3-day stretch of good fortune and the WSOP Main Event could crown its oldest champion ever.

Right Where He Belongs

The WSOP Main Event may be more about luck than skill, although being skilled certainly helps. Over the years, numerous less-than-super-notable poker players have gone on sick heaters to achieve the final table, such as Jerry Yang and Jamie Gold. And while Neuville doesn’t have the resume of either a Phil Ivey or Hellmuth, he’s more accomplished than many a player who has won big bucks at the World Series in the past.

After securing his spot at the Main Event final table, the Belgium native moved into 92nd place on the Global Poker Index. Notable names behind him on the list include Brian Hastings (95th), Jason Koon (98th), and Phil Hellmuth (99th). Regardless of how the final table plays out, Neuville belongs there.

A Look at the Life

Pierre Neuville was born in Belgium in 1943. He was first introduced to poker in 1957, but his career didn’t take off until many years later.

He achieved great success as an entrepreneur long before he became a known professional poker player. In 1969, he created a popular board game called Eddy Merckx. The toy business was good to him. By 1982, he sold off his company to Hasbro, an industry giant.

Neuville stuck around for another decade at Hasbro, serving as the company’s vice president. In 1993, he went back out on his own, starting what became a successful personal consulting service. His business received national attention and included an impressive clientele, including Hollywood superstar Kevin Costner.

Although Neuville has a strong business sense, he was born to play poker. He has yet to win a major tournament, but he’s come close a few times. Receiving the Lifetime Achievement Award at the European Poker Awards didn’t seem to thrill him all that much.

“The best is still to come,” he said. For this septuagenarian, life still holds challenges and surprises. One of those could be defeating a table of significantly younger players (but one) to take home the Main Event gold bracelet. Tune in to ESPN on November 8th to find out.

I’m sure looking forward to November 9..kinda pulling for this guy.