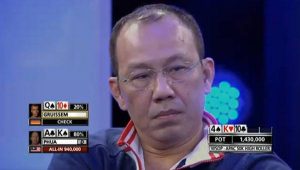 Paul Phua and Darren Phua want to be allowed back at the poker tables, but federal prosecutors want to uphold a casino ban against the father-son duo. (Image: liquidpoker.net)

Paul Phua and his son Darren are attempting to have a ban that prohibits them from playing poker in casinos lifted ahead of their trial on illegal gambling charges, but federal prosecutors say that the prohibition should stay in place.

The Phuas are known for their high-stakes poker play in Macau and Las Vegas, but are currently barred from casino activities as a condition of their pre-trial release.

According to court papers that were filed in December, lawyers David Chesnoff and Thomas Goldstein have argued that the Phuas have complied with all terms of their pre-trial release since being arrested in July, and just want a little more freedom while they await trial.

That would include the ability to not only play poker, but also to eat, shop, and go to shows at Las Vegas casinos, too.

Prosecutors don’t want to allow the Phuas access to casinos, however.

In a written response earlier this week, Assistant US Attorney Kimberly Frayn said that there’s no reason to think that the poker ban is overly restrictive to the Phuas, particularly considering the fact that the charges they face are related to illegal gambling activities. The Phuas are accused of operating an illegal sports betting ring out of a Caesars Palace villa during the 2014 World Cup.

“The defendants are not lawfully present in the United States,” wrote Frayn. “They are present only until this criminal matter is resolved and then they will be expelled. They are charged with crimes connected to unlawful gaming activities, which they conducted clandestinely on casino premises and which were furthered through associations made and maintained through poker gambling salons located within the casino.”

But defense lawyers responded themselves, pointing out that the charges against the Phuas have nothing to do with the integrity of casino gambling or activities at the poker tables.

Noting that “casinos are highly regulated environments with cameras throughout,” they said that the amount of security at Las Vegas casinos should be sufficient to ensure their clients wouldn’t get themselves into any more trouble.

The Phuas are the last of eight original defendants who were charged after a raid on the Caesars Palace villa where officials say a major sports betting ring was being hosted. One of those defendants saw the charges against him dropped last year, while five entered guilty pleas, mostly to lesser charges that will likely result in probation at sentencing.

Since the beginning, the Phuas’ case has been tied into the world of high-stakes poker.

At the time of their arrest, the two men were found with poker pro Tom “durrrr” Dwan, who later showed up at some court appearances and was seen talking with defense lawyers during the case. Phil Ivey and Andrew Robl then combined to put up $2.5 million in bail in order to secure the Phuas’ release from jail.

There are still significant questions about how much, if any, of the case against the Phuas will ultimately be heard in court. Defense lawyers have argued that their clients’ constitutional rights were violated by FBI agents, as the tactics they used to gather evidence could constitute an illegal search. A federal magistrate judge is currently considering these claims.