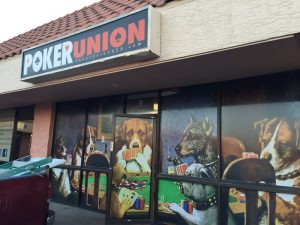 Following a yearlong undercover operation at the Poker Union Club, Phoenix police deduced that the illegal rake being taken by the club had crossed the threshold of Arizona gambling laws. (Image: pokerunionusa.com)

Operators of an illegal poker club in Phoenix, AZ appeared in court this week to face charges including controlling a criminal enterprise and managing and financing gambling.

Esho and Ashour Odisho are the owners of Poker Union, a card room raided by police last Thursday following a yearlong investigation that included the use of undercover agents. Also in court was Bruce Lord, identified as the club’s tournament director.

Despite the undercover investigation, Poker Union was hiding in plain sight, proclaiming the nature of its business over its door and advertising itself online as a private members poker club, offering low stakes tournaments and $2-$5 cash games.

“We will champion the cause of the Poker Players Alliance that poker is a sport; a game of skill more than mere chance or dumb luck, and not gambling in the same vein as other casino games where the house has an active stake and decidedly advantageous odds,” proclaims the website.

“Poker was played in Arizona long before casinos took over the game and claimed it as their own. It is time we take back what has always been ours and reclaim a game enjoyed around the world by men and women of every age, race and creed.”

Unfortunately, what Poker Union allegedly had in common with said casinos is that it was taking a rake in ring games and accepting buy-ins for tournaments in violation of Arizona law. All gambling in Arizona is illegal, unless it is specifically excluded from legality. And while poker home games are permitted in the state, poker spread for commercial gain and run as a business is not. According to prosecutors, Poker Union could have been raking in as much as $10,000 a week in cash.

“One of the things that made it illegal versus your normal poker game that you might have at your own home is the business was profiting off of the folks that were in here playing poker,” explained Arizona Department of Gaming spokeswoman Amanda Jacinto. “No matter, win or lose, the business would typically take a portion of the money.”

The three men were released on their own recognizance and are due to reappear before the judge on August 25.

The Law is a Donk

In order to be defined as gambling, Arizona law requires the “risking something of value for an opportunity to win a benefit, which is awarded by chance.” Should the men’s lawyers argue that poker is predominantly a game of skill and therefore not gambling, as they are likely to do, it will be an opportunity to at least test the law in Arizona.

It has been tested before, unsuccessfully, though, and once by an ex-judge. In 2012 Harold “Bud” Lee Jr., former Phoenix Justice of the Peace and current poker activist, was convicted on three counts related to organizing area card rooms. Lee is an outspoken critic of the state’s gambling laws.

Oops. Article got Arizona law wrong on the definition of gambling. No doubt AZ’s gambling law is a donk:

ARS 13-3301(4): “Gambling” or “gamble” means one act of risking or giving something of value for the opportunity to obtain a benefit from a game or contest *of chance or skill* or a future contingent event but does not include…

AZ doesn’t distinguish the predominance of skill in the game or contest to avoid gambling. AZ law does provide exclusions for gambling (Regulated, social and amusement) but the gaming police (ADG) want to protect the tribal exclusivity of their paymasters, the 23 tribal casinos in Arizona.

This doesn’t explain how the US Open Chess Championship, conducted at the Arizona Biltmore last August, with it’s $190 buyin and $50K cash prize pool, manages to avoid gambling allegations. Chess for cash is really no different than poker for cash… But ADoG, in it’s infinite wisdom, looked into it and published an unsolicited opinion that the US Open was not illegal.

I’m trying to get the Ombudsman’s office to see what ADoG did to poker players by sweeping the US Open under the rug. In a way, ADoG helped us, because they opened the door to amusement gambling poker tournaments structured like the US Open Chess championship was in 2015. But I still have a problem with the way ADoG handled their investigation of the US Open Chess Championship… enough to determine it was not illegal anyway… but how and why, they won’t tell. Still, the AG gave The Poker Revolution (.com) a “green light” letter after successfully registering a poker tournament modeled after the US Open event. So now what? Find a venue outside of Phoenix (which has gambling ordinances that are stricter than the STate exclusions) willing to allow a group of us to play poker there.