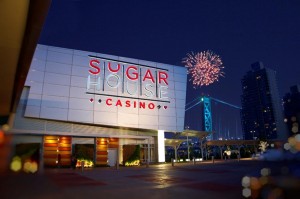 The SugarHouse Casino will be the location of Philadelphia’s first poker room. (Image: phlvisitorcenter.com)

The Philadelphia SugarHouse Casino is about to become the premium destination for poker players in the City of Brotherly Love. While many states in the US are focused on bringing poker and other casino games online, brick-and-mortar locations scattered throughout the country are expanding their business in the hunt to draw in players.

Pennsylvania is no stranger to casinos and gambling, as the state has its own lottery and plenty of horse track betting sites. But as the sole stand-alone casino in the state’s largest city, SugarHouse Casino needs to make an impact. And with 24 poker tables installed on October 17, SugarHouse is gearing up for its role as Philadelphia’s first poker room.

The SugarHouse’s brand new poker tables arrived by truck and were inventoried and verified by Pennsylvania Gaming Control Board officials. SugarHouse general manager Wendy Hamilton had the honor of breaking one truck’s seal. The poker tables were then taken to the casino’s interim poker room, which is on the south side of the property and faces the Benjamin Franklin Bridge.

Starting in November, the tables will be available for live play, marking poker’s anticipated debut in the city. The tables will remain in the interim room until the $2.9 million permanent room opens later next year. “We found a way to put this temporary structure up, just in the meantime,” said Hamilton. “This will house 24 poker tables, so that’s 240 playing positions.

The interim poker room is only in place while the location’s $164 million expansion takes place. Groundbreaking for the casino took place in July and is planned to wrap up in the fall of 2015. The new poker room alone is expected to bring in $1.8 million in tax revenue for Philadelphia and the state, while 100 new jobs will be generated, with 80 of those being for poker dealers.

The casino’s expansion is meant to introduce non-gaming sites as well. Restaurants, a parking garage, and 30,000 square feet of event space will be added along with the poker room. The event space will have a view of the Delaware River and the dedicated poker room will allow for a total of 30 tables.

“This is a game changer,” Hamilton told the Philadelphia Business Journal. “When we opened, it was a long road from getting a license to opening our doors. There’s not a lot of growth in the gaming market. So, to compete, we need to be a more amenity-rich experience, giving guests a more well-rounded experience and more things to do.”

In total, the expansion should generate 500 full- and part-time jobs. Over the course of the expansion project, 1,600 construction jobs will be created. SugarHouse Casino’s larger real estate also means an annual contribution of $1 million to the Penn Treaty Special Services District for the economic development in Fishtown and surrounding neighborhoods.

While SugarHouse’s expansion and budding poker room will bring in more jobs and revenue over time, it’s simply one of the many things happening for the location. Earlier this month the casino’s over 1,100 employees voted the SugarHouse as one of Philadelphia’s “Best Places to Work.” It was the fourth year in a row the casino earned such recognition.

On October 15, days before the poker tables arrived, the Philadelphia 76ers announced the SugarHouse Casino would join the team as an official partner. The team’s regular season “tip-off viewing party” will take place at SugarHouse. The casino will also host the $100,000 Buzzer Beater Challenge at ten of the team’s home games.