Even though it’s not until November, the star power keeps getting brighter for the World Series of Poker Europe’s (WSOPE) One Drop High Roller Tournament as several marquee players have plunked down partial payments. 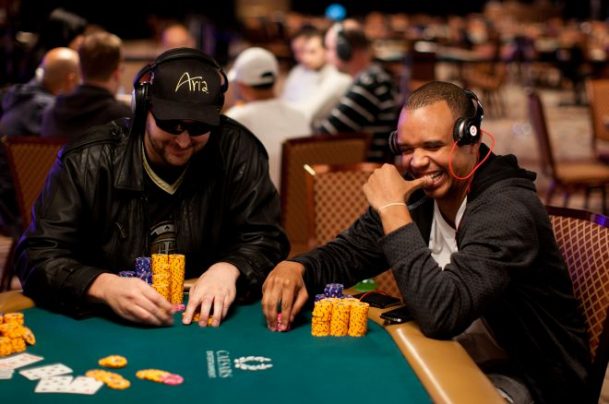 Phil Hellmuth and Phil Ivey are two of the big names that have already committed to play in the WSOP Europe One Drop High Roller Event in November at the Kings River in Rozvadov, Czech Republic. (Image: Poker News)

Phil Ivey was the biggest name to put up the nearly $12,000 deposit on the tournament that is being hosted by Kings River in Rozvadov, Czech Republic. The entry fee is $118,307.

Fifty people have already committed and the entries will be capped at 111 players.

“It is only March and we already have a staggering 50 players registered paying the €11,000 non-refundable deposit and an extra seven players of whom have said they will play but we are waiting the deposit,” said Leon Tsoukernik, owner of King’s Casino. “These kind of numbers are something that is surely unprecedented in an event of this kind this far away from it starting.”

The One Drop is the official charity for the WSOP and money raised through this contest will contribute to projects that will supply water access, sanitation and hygiene causes around the world.

This event is part of the WSOP Europe Festival and will feature $21 million in guarantees, 11 gold bracelets and 84 competitions over 44 days of play. It is billed as the largest event outside of the WSOP in Las Vegas.

The headlining match will be held Nov. 3 and many big names have committed.

Phil Hellmuth has also pledged to be there.

I’ve heard so much about Leon and King’s Casino and look forward to checking it out in person,” Hellmuth said. “I will be going for the WSOP Circuit and then on to WSOP Europe and naturally I will be playing both the High Roller and the Little One for such a brilliant cause and the bracelets up for grabs.”

Finding a Home for WSOPE

Organizers are hoping they have found a permanent place for the contest that has bounced around several countries, including England, France, and Germany. The Czech Republic resort will host this year and 2019, along with Circuit events in 2017, 2018, 2019, 2020, and 2021.

Tsoukernik was certainly excited to host the prestigious affair. He built the casino nearly 15 years ago and it has more than enough room for the grinders. There are 160 tables and a 250-room hotel, the largest setup in Europe.

“We are bullish in this becoming the European equivalent of the WSOP in Las Vegas, something we have always dreamed of doing when we first began our foray into Europe a decade ago.” said Ty Stewart, WSOP executive director.

Check out your lucky days for tournaments… Google lucky days