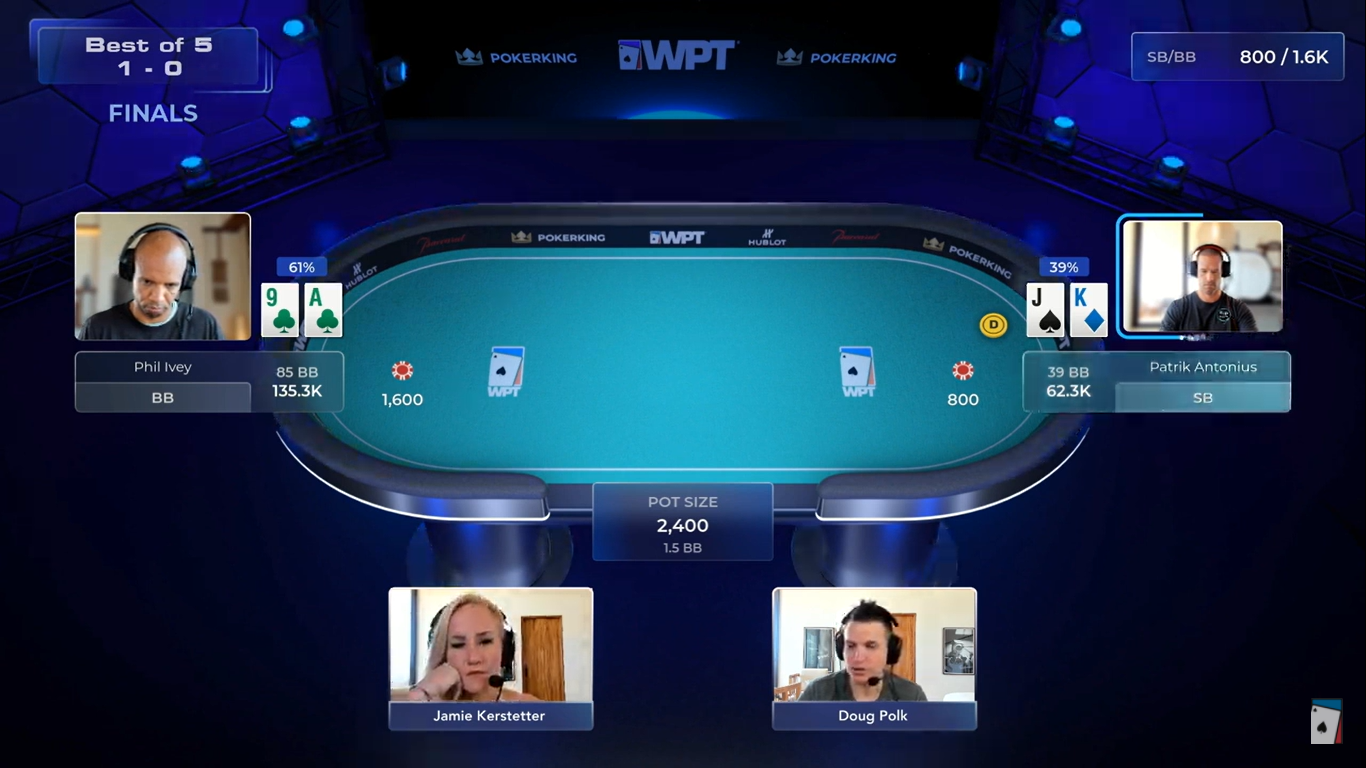 In doing so, Ivey claims the tournament championship along with the $400,000 first-place prize. Antonius, a former Full Tilt Poker pro like Ivey, received $200,000 for second place out of 32.

The final round was quicker than expected. The finale featured a best-of-five format, which differed from the preliminary rounds of the competition where players had win two out of three games in order to advance. Both players faced stiff competition on their way to the finals. Antonius defeated Doug Polk and Sam Greenwood, among others, while Ivey bested professionals Manig Loeser, Anthony Zinno, Stephen Chidwick, and Christopher Kruk.

The World Poker Tour couldn’t have asked for a better matchup in the finals. Ivey and Antonius, two of the most popular players of all time, have an extensive history, having played countless hours together in high-stakes cash games back in the Full Tilt Poker days and on televised poker shows like Poker After Dark and High Stakes Poker.

If you were hoping for a lengthy, back and forth battle between two poker giants, you got at least some of what you were hoping for, as Ivey made quick work of Antonius in Cabo San Lucas, Mexico on Tuesday. The tournament took place on the Poker King app, a poker start-up promoted by Ivey, Tom Dwan, and other high-profile pros. Although they played from a tablet, both players were seated across from each other at a beachside resort.

In the first game, Antonius jumped out to an early lead as the chips flew around the virtual felt, with both competitors playing aggressively. Ivey would soon take over the lead, however, before getting it all-in preflop with pocket 9’s against A-8. The board ran out 7-Q-5-7-4, giving the 10-time WSOP bracelet winner a 1-0 lead.

In the second game, it took just about 30 minutes before Antonius decided to take a stand with K-7 on a board of 4-Q-8-3-9. With 45,200 chips left behind — about half of Ivey’s stack — he decided he attempted an all-in bluff. The only problem was, Ivey held pocket jacks and didn’t even contemplate folding.

In Game 3, Antonius was in desperation mode, needing to win three straight games to win the championship. Less than 10 minutes into the game, Ivey flopped the stone-cold nuts with 3-4 (2-6-5) and was up against A-6. An ace on the turn was cruel to Antonius, giving him the top two pair. When the board paired a 2 on the river and with 61,000 already in the pot, Ivey jammed for 65,000. With his strong hand, Antonius was unable to get away and was left with crumbs.

He’d bounce back a bit and get the game back to a 4-1 deficit, but that was short-lived. Ivey got the rest of Antonius’ stack with top pair against middle pair moments later. In doing so, he wrapped up yet another poker title, adding $400,000 to his already impressive poker tournament resume that boasts more than $31 million in cashes.