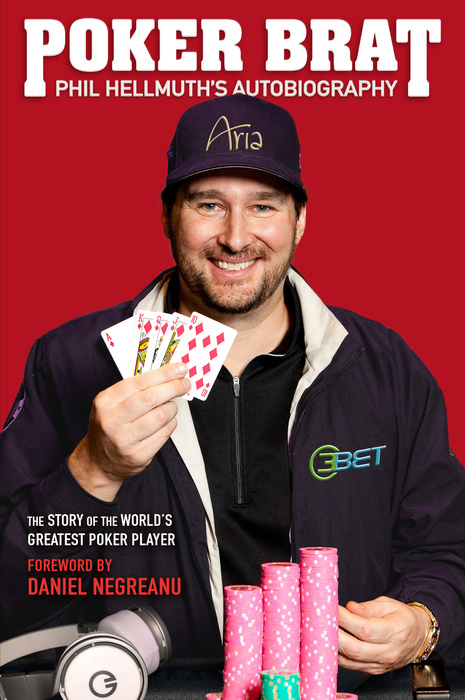 He says he wrote every word himself, and now Phil Hellmuth is baring his soul in his autobiography ‘Poker Brat,’ which comes out in August. You can buy advance copies, though, with a special twist. (Image: dandbpublishing.com)

Who knows where Phil Hellmuth found the time to pen an autobiography, but the fact is, he now has done so. Aptly named ‘Poker Brat,’ the look inside the man who’s won more WSOP bracelets (14) than anyone else explores the highs, lows, and inexplicable behavior that so often are part and parcel of a super-successful champion (look at Tiger Woods for an extreme example of that paradigm).

If you’ve ever wanted to crack Hellmuth’s pocket aces with your 7-2 off-suit, this is your opportunity. But the only way to find a ‘Golden Ticket’ is at the Rio. Here’s the deal:

You can pick up a copy of Hellmuth’s self-penned autobiography ‘Poker Brat’ at the Rio (home to the WSOP, of course) in Las Vegas, beginning on June 13.

Stop by the D&B Publishing booth in the vendors’ hall between the hours of 10 am and 8 pm PT this summer while WSOP is on.

Your Chance to Play a Private Tournament with Phil Hellmuth 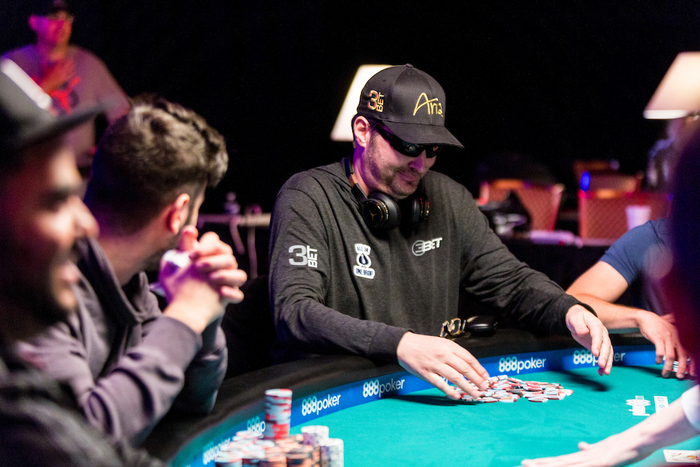 Ever dream about playing in a private event with Phil Hellmuth (seen here at the Big One for One Drop at WSOP 2017)? Now you have eight chances to make that dream come true. (Image: Melissa Haereiti/pokerphotoarchive.com)

Eight of these books, chosen at random, will have a ‘Golden Ticket’ inside. The Lucky Eight who strike gold will receive a $1,000 entry fee into a private tournament at Aria in Las Vegas with Hellmuth on May 19, 2018, two free nights at the resort, and Kimo Sabe Mezcal tequila as an added bonus.

(The booth is closed on Mondays. Cash and credit cards are accepted).

“This is a once-in-a-lifetime opportunity to play with one of the greatest masters of the game, ever,” Dan Addelman, CEO and publisher at dandbpoker.com, told CardsChat. “Imagine the stories you can tell your grandkids someday about the tournament you played with the Poker Brat himself, Phil Hellmuth.”

I was lucky enough to have access to an advance copy of the book, and I can tell you that I could easily pick out dozens of interesting paragraphs from this 320-page autobiography. The tone is set by Daniel Negreanu’s heartfelt forward.

“Phil cares so deeply about the game of poker that when you see him on a tirade after a bad beat, you are seeing his genuine feelings in that moment. These are feelings that I am sure we can all relate to when the river card dashes our hopes. Phil doesn’t hold back and watching him play is reality TV at its best.”

Hellmuth himself delivers on his promise to open up his veins and show readers what drives him and what his flaws are, as evidenced by this opening paragraph from Chapter Two, called “Every Rose Has Its Thorn”:

“How have I managed to become the “poker brat”? Why do I throw tantrums when I lose? Worse, why do I berate other players when they beat me in big pots? It’s about battling a lifetime of self-esteem issues! But how is it possible that I would suffer from low self-esteem?

I have never cheated on my wife in 25 years of marriage, I have been a father; I have perfect health, I don’t do drugs (not even aspirin!), and I don’t drink heavily; I am honorable and honest to the nth degree, and I haven’t been broke since 1987; and I have earned a good measure of fortune and fame, I own every important record at the World Series of Poker (WSOP), and these days I have become a global poker icon.

In a nutshell, I have solid reasons for feeling comfortable about myself, but I’ve suffered from low self-esteem because of how things went during my first 21 years on the planet.”

Say what you want about Phil as a person. Whether or not you admire his table manners (we’re not talking about dinner here), there’s no denying he’s one of the best poker players in the history of the game. The numbers don’t lie.

Hellmuth is the Michael Jordan of poker. He’s won more major titles than anyone else and has one of the most recognizable names to casual fans.

If Phil never wins another poker tournament, he’ll still be one of the premier iconic faces of poker for all time. He’s scooped those 14 WSOP bracelets and has more than $21 million in live tournament winnings to his legacy and his bankroll. So far.

Average Joes Can Relate to Him

The Brat sits courtside at Golden State Warriors games. And he can afford to do things most of us would only dream about.

But, after reading his book, I realized he’s more of an Average Joe than I thought. Save for the extra zeros in his bank account (ok, lots and lots more zeros) and his Hollywood, sports, and poker star celebrity friends, he’s no different from most players. Many in the poker community came up from similar backgrounds.

I think some folks, when they watch Hellmuth throw a tantrum after a bad beat, see what they think is just another spoiled rich guy. My suggestion: read the book. You’ll see where he’s coming from and might have a different opinion (see our book quote above for more on that).

How He Became the Poker Brat

Hellmuth has long been dubbed the Poker Brat. The fitting nickname was given to him because he has a penchant for berating opponents and throwing temper tantrums.

When you utter phrases such as “these guys can’t even spell poker,” and “if it weren’t for luck, I’d win every tournament,” you’re going to end up with an unflattering nickname and harsh criticism.

As glamorous as his adult life has been, Hellmuth isn’t proud of his youth. He didn’t have many friends growing up. His grades were often worse than his reaction to bad beats.

“Considering the general ineffectiveness of my earlier life, how well was I likely to cope with major poker success? Not well,” his autobiography reads.

In ‘Poker Brat,’ Phil details the events that created the person he is today and how he earned his moniker. I never realized until I read the book how challenging his childhood was. And then he hit his teens:

“Attending high school was … the worst experience of my life! My freshman year was a disaster … I had no girlfriend, I had bad grades, and my friends were on again, off again, probably because I was so insecure and sensitive about the warts on my hands. Sadly, I had learned to hide the backs of my hands at all times during school, because I had the worst case of warts on my hands that I have ever seen, or even that I have ever heard of. Literally, the back of every finger on both hands was covered with warts. To say that my hands were unsightly would be being kind.”

It’s this kind of vulnerable and honest explanation of some of his struggles that make Phil Hellmuth’s humanity shine through.

‘Poker Brat’ will be available online at D&B Poker’s website, PhilHellmuth.com, or at the Gambler’s General Store in Sin City on August 1. You can pre-order an e-Book ($16.95) or hardcover copy ($24.95) now.

But if you want that Golden Ticket (or at least a shot at one), you’ll have to show up in person at the Rio, beginning Tuesday, and hope to pull a Hellmuth, literally. Good luck.

Will you be one of the Fortuitous Eight? You won’t know unless you go down to the Rio for your chance at a Golden Ticket inside eight copies of ‘Poker Brat.’ (Image: CardsChat.com exclusive).

No matter what the general consensus may be, as an avid poker fan and amateur player, it is my personal feelings that “the poker brat” brought world-wide attention to a sport, yes, sport-at a time when it was needing a shove into the new millennium. With all his braggadocio, Phil took a staid saloon room mentality into a new and very exciting generation. He encouraged young guns into the card rooms, casinos and saloons to play poker. I always loved watching him–he was never boring or expected. Thank you Phil for years of fun!

I am an avid fan of Phil. Please tell me where I can purchase a copy of his new autobiography. I am 78 years old and can’t go to the WSOP, so I must get it by mail. Thanks.