Phil Hellmuth will host the 19th annual Tiger Jam charity event at MGM Grand in Las Vegas on May 19-20. The Poker Brat, when he isn’t busy whining about bad beats from people who “can’t even spell poker,” spends time giving back to the community. 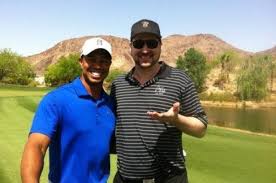 Tiger Woods and Phil Hellmuth will be in Las Vegas May 19-20 to host Tiger Jam, a charity poker and golf event at MGM Grand. (Image: pokerground.com)

Tiger Jam, a charity event benefiting the Tiger Woods Foundation presented by the World Poker Tour, will have a mix of golf, entertainment, and poker. Hellmuth, a 14-time WSOP bracelet winner and Tiger Woods, a golf legend, will come together to raise money for a good cause and entertain guests.

Golf, poker, and party packages to the event can be purchased. All events take place in Las Vegas. The poker tournament will be hosted on May 19. A mix of poker pros and celebrities will attend.

The poker tournament costs $11,000 to enter with prizes awarded to top finishers and the proceeds going to charity.

Many entertaining activities are scheduled for 2017 Tiger Jam. Poker Night kicks things off on Friday. On Saturday morning, guests will head over to Shadow Creek golf course for a round of golf. Select individuals will partake in a private Q&A session with the legendary golfer.

In the evening, an intimate concert and silent auction are scheduled to entertain guests. Pop sensation Jason Mraz headlined the event last year. This year’s performer hasn’t been announced.

The Tiger Woods Foundation was established in 1996 by Tiger’s father, Earl Woods. The organization has raised more than $19 million to create and support community-based programs that improve the health, education, and welfare of children in the United States.

Tiger, once considered the best golfer in the world, hasn’t been at the top of his game since winning his last major tournament in 2008. Woods’ prime years are long gone and the injuries have piled up. He has 14 majors in his career, four behind Jack Nicklaus’ record.

A decade ago, most anticipated Woods to smoke past Nicklaus’ record. Now few expect him to win another major. Injuries have mounted, causing the golf legend to withdraw from numerous events in recent years. But he’s remained committed to bettering the lives of American children.

Woods, along with his buddy Phil Hellmuth, will be in Las Vegas May 19-20 for the 19th annual Tiger Jam charity event.