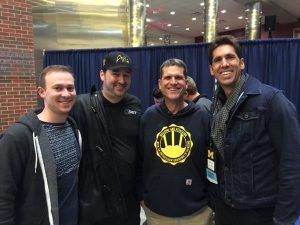 Phil Hellmuth holds the record for most career WSOP bracelets but his current claim to fame is his relationship with University of Michigan football coach Jim Harbaugh.

Hellmuth is part of the polarizing coach’s circle of friends. And the Poker Brat is rubbing off on him.

In a recent ESPN.com article, writer Dan Murphy shared details of the friendship. The two multi-millionaires met at a Stanford University basketball game while Harbaugh was a football coach at the school.

During a press conference while Harbaugh was the San Francisco 49ers head coach, he used a poker analogy he copied from the Poker Brat.

The 49ers were off to an impressive 9-2 start, but there are 16 games in an NFL season and then the playoffs begin. Hellmuth told Harbaugh to keep his team focused on the future, not on the 9-2 start.

“We may be ahead in the chip count, but we don’t have a seat at the final table,” the coach told reporters later that week. It wasn’t the only time Harbaugh has used poker analogies during an interview.

On Saturday, 3rd-ranked Michigan lost in double-overtime to its hated rival and 2nd-ranked Ohio State. The loss all but eliminated the Wolverines from College Football Playoff contention and likely propelled the Buckeyes into a playoff spot.

Harbaugh channeled his inner Phil Hellmuth after the game. During his post-game press conference, the man dubbed “Captain Comeback” during his NFL career went on a Hellmuthian rant, blaming the officials and not his team for the loss.

“It wasn’t a first down,” Harbaugh said after the game in regards to Ohio State quarterback J.T. Barrett getting credited for a key first down that kept the game alive for the Buckeyes.

Coaches can be fined for publicly criticizing the officials. Harbaugh makes $9 million per year so it won’t be a problem. Hellmuth, never has to worry about being fined for his meltdowns after busting out of poker tournaments either.

Harbaugh isn’t the only celebrity Hellmuth considers a friend. He’s been connected to the likes of Tiger Woods, Andre Iguodala, and Stephen Curry.

Being the all-time WSOP bracelet winner has its perks. He gets courtside seats to Golden State Warriors games and schmoozes with celebrities.

It’s good to be Phil Hellmuth.