Phil Hellmuth Takes Us Behind the Scenes for NBA Exploits, WSOP 2017, and His Autobiography: CardsChat Exclusive Interview

On May 4, 14-time World Series of Poker bracelet winner Phil Hellmuth tweeted several photos of himself at a Golden State Warriors basketball game. Sporting a pair of Muzik headphones and a rather snug jersey, Hellmuth isn’t one to shy away from name dropping, so we at CardsChat decided to reach out to the iconic poker star to talk basketball, the impending WSOP, and his soon-to-be-released autobiography, Poker Brat. 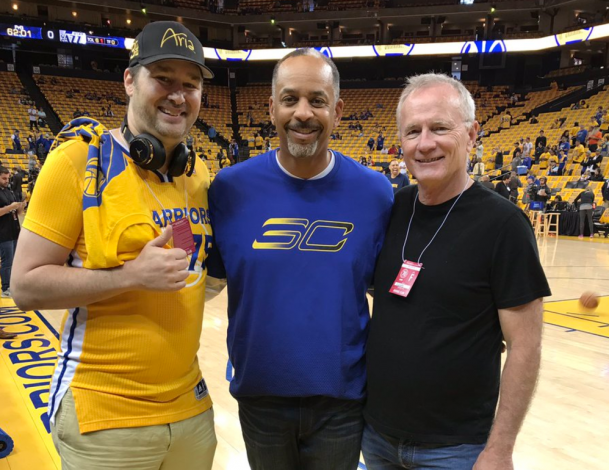 Gearing Up for Bracelet #15

Phil Hellmuth: This summer I’m trying something new. Many years back, a sponsor asked me to do an event in the middle of the series in Canada. I went and did the event. I was super tired, it was on the East Coast, and I came back to Vegas and it wrecked me for a week.

In 2009, I got offered $35,000 and a private jet back and forth to Bandon Dunes Golf Resort. I’ve been wanting to play there, so it was a great offer. I passed on it. I think Gavin Smith and Erick Lindgren went in my place. This year, I am accepting an event right in the middle of the WSOP. June 28 I am going to do an appearance at Pebble Beach.

Now that I’m in my 50s, this forces me to take a break. I can’t play any tournaments in the days leading up to it, so it kind of forces me to take three days off. I’m sure I’ll be in a beautiful suite at Pebble Beach, a view of the ocean, maybe play a little golf and gather some energy.

CC: Your autobiography, Poker Brat, releases this summer. What can you tell us about it? 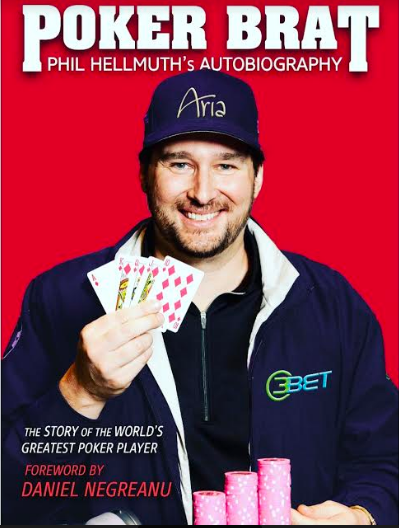 Phil Hellmuth’s upcoming autobiography is a true tell-all, delving into personal drama away from the felt. (Image: D & B Publishing)

Brian thought it was great, and the editor of the book doesn’t even play poker and wanted to tell me it’s a great book. He said it deserves to be a New York Times bestseller, that’s what he said. Brian said the same thing, but he’s worried about getting the word out on the book.

It’s very inspirational. It talks about a lot of the lows that I’ve had in my life, how I’ve struggled with friends. My struggles are real, but they’re not like somebody who did a mountain of cocaine and blew everything and had to look for redemption, but the struggles are real. I share everything. I’m very authentic.

Masters of the Universe

CC: According to a Tweet, you attended a Golden State Warriors basketball game last week. What was that experience like?

Hellmuth: My life’s so spoiled. I got to the game at 5:30 p.m. They don’t even let the public in then most times. I park in F Lot, which is where the owners and players park. I walk in and there’s a door that says “Player’s Only.” Left is where everyone else goes, and right is where the players and primary owners go. So, I turn right and there’s a big metal silver door and I walk right in. 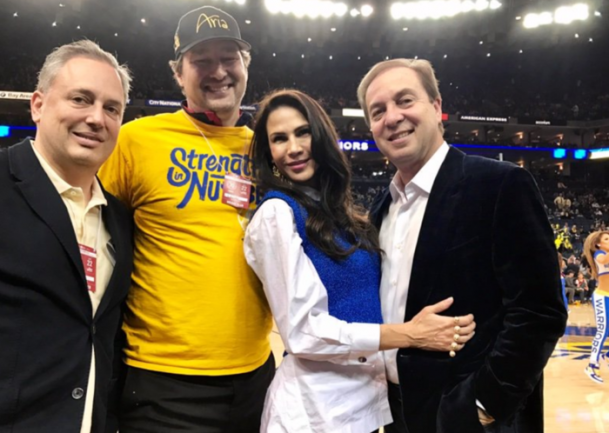 Hellmuth at a Warriors game on January 17 of this year, with (from left to right) David Sacks, CEO of Yammer, Nicole Curran, and team owner Joe Lacob. (Image: Phil Hellmuth/Twitter)

I open the door, I’m with my friend Rick Thompson, and five steps in front of me is Stephen Curry talking to Mark Jackson, who is a great announcer and used to coach the Warriors. I walk up and see Steph looking at my shoes. I have on these really shiny gold Pumas on. Mark reaches out his hand and I shake it. He says, “Hey Phil Hellmuth, it took you a second to shake my hand.” He’s teasing me.

I said, “Yeah, because Steph was about to say something about my gold shoes.” We all started laughing and then talked for a couple minutes before Steph leaves to go warm up. So, I start walking through the hallway and to the left is the locker room. I never go in, I could, but I just never do it. I feel like these guys are working, that’s kind of their space. The security guys all know me, giving me fist bumps. So, I continue on to the owner’s suite and there’s Joe Lacob.

To get time with Joe and his fiancée Nicole Curren, to talk about life, talk about with what’s happening with the Warriors, that’s forty percent of the fun. Plus, I always bring a really cool friend with me from what I call the “Masters of the Universe Poker Game.”

CC: So, you got to hang out in the owner’s box?

Hellmuth: Yeah. They have two sushi chefs in the owner’s suite on the left when you walk in. It’s an amazing room. There’s a bunch of food, from cheeseburgers to hot roast beef. At halftime, they open the frozen yogurt stand in the owner’s room. Of course, there’s a full bar in there. 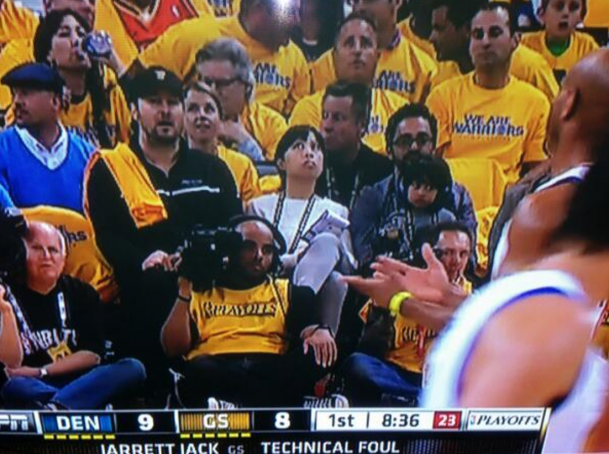 Next to poker, a little NBA action is closest to the Poker Brat’s heart. (Image: Brian Balsbaugh/Twitter)

We sit down and eat with Joe, just having fun. Within two minutes of arriving, the bartender comes over and hands me a Bailey’s and coffee in a paper cup with a lid. He knows me, I tip him every time. Three years ago, they wouldn’t have it when I’d try to order it. I just walk in and they hand me the drink. That’s so cool.

I go out on the floor to watch warmups. I see Dell Curry, Steph’s father. We’ve hung out six or seven times, always at games. I took a picture with him and Rick Thompson. I tweet out he’s played in the NBA for 16 years. How many people play in the NBA over 15 seasons? I’m thinking less than five percent.

Dell was sitting three to my right. I liked his enthusiasm. He was like, “Don’t reach, don’t reach,” when Steph was covering somebody. If you coach a kid from age six on, of course you’re going to shout: “Don’t reach.” I thought it was cool, man. His kid is one of the best players in the NBA.

CC: Do you ever get to interact with the players?

Hellmuth: I know when the players are in the locker room because they play with me on my Pineapple app by Thinking Ape. The players, the stars of the Warriors, click back at me usually around 22 minutes before a game starts. Even in the Finals. I’m like WTF? It makes sense. They’ve done all their warmups and they just want to play a game where they don’t have to think too much. So, I happen to know they’re in the locker room from 24-16 minutes out, because they’re always clicking back at me.

Remember when Chad le Clos was shadowboxing with Michael Phelps during the Olympics? He was right next to Phelps trying to intimidate him. It became a huge story. Well Mike, he was playing Pineapple on our Thinking Ape app. So, when the whole world thinks he’s getting intimidated, he’s just playing pineapple on the app with his headphones on [laughs]. The number of athletes and billionaires who play on our app is scary.

CC: Is your player interaction limited to the app?

Hellmuth: A lot of the time I go up to the players and say hi, but it’s a Playoff game so I just let it go. Then all of a sudden, whoosh, here comes Draymond Green. He’s giving me a quote for Poker Brat, he’ll be on the jacket. He’s very charismatic. I think he’s a little bit like me in that he wears his emotions on his sleeves. He’s fun to watch. So much joy when he makes a big block, and almost like tilt when they make a bad call on him.

CC: How do you manage to get such great access to the Golden State Warriors?

Hellmuth: I sit right next to Joe Lacob, the primary owner. We have so much history, really good friends. To hear his perspective and knowledge, I mean there’s a reason why this team is great. He’s a big part of it. When I go to a NBA game and sit on the floor, it can get boring, but it’ll never get boring sitting next to the owner and talking to the players. There’s a lot of respect there, and just so much positivity.

CC: The poker world saw a picture of you at the game. We gotta ask, what’s up with that, um, snug jersey?

Hellmuth: Everyone makes fun of my [size] medium shirt. The Warriors gave me my own jersey with “Hellmuth” on the back a couple of years ago. That jersey is a little tight. It’s always making social media, this too tight jersey. They’ve even talked about it on Warriors radio.

I could lose a few pounds, but yeah, that jersey is a little too tight.

CC: It was also at that game that Draymond Green looked like he might be sidelined by an injury. What was it like watching that play out?

Hellmuth: Watching him light it up, I was just jumping up and down. When he went down he was holding his knee. I’m sitting next to Joe and he just turns ashen. He said it looked like a ligament, and we were just thinking, “Oh my god.”

He was wondering, can we win a championship without Draymond? He has so much heart and charisma, he does so much for us. Two or three minutes pass and it’s as if you’re watching this dream of a championship blow up. Fortunately, Draymond somehow stands up and walks back to the locker room on his own. He then appears back on the bench before they put him back in the game. It was both stressful and exciting.

CC: What did you do after the game? Rumor has it you played a little poker.

Hellmuth: After the game, we went to the owner’s room for some champagne. When I left, I went to a high stakes poker game at a casino, not the “Master of the Universe” game. I arrived way late and I won like $80,000. What a night. I couldn’t sleep, it was like I won a tournament. Just so much excitement.

If I could win 80k at the end of a night, I think I might just spend some of it in a back street tailors having that shirt secretly enlarged a bit, and then pretend to the rest of the world I had lost some weight.

I quite like reading an article that can make people think. 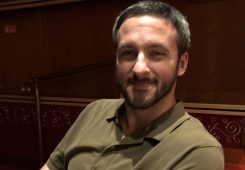