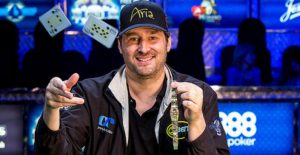 Phil Hellmuth isn’t one to shy away from a camera. After all, we are talking about a man who once comfortably exposed his bare stomach on ESPN. The Poker Brat will make a cameo appearance on Showtime’s popular show Billions during its second season, likely fully clothed.

The episode is scheduled to air sometime late in 2017. Brian Koppleman, one of the executive producers, also was a writer for the legendary poker movie Rounders. The show has an 8.4/10 rating on IMDb from more than 17,000 voters.

Hellmuth loves the limelight. He was recently featured on Poker Central’s Pokerography series, a show that chronicles the lives of poker’s biggest stars. During the WSOP Main Event coverage each year, Phil is a central focus of ESPN’s coverage, even if he doesn’t make a deep run.

The 14-time bracelet winner, fresh off one of his most disappointing WSOP’s ever, flew out to New York to make his cameo appearance. He didn’t release any details of his role, but he posted pictures on Twitter with cast members Malin Akerman, Maggie Siff, and Kelly AuCoin.

Billions aired 12 episodes on Showtime in 2016 and is set to release its second season next year. The show is an American television drama series based on the life of a federal prosecutor of financial crimes.

Poker Players in Film and TV

Hellmuth isn’t the only poker pro to appear on TV or film. David Williams, one of the most popular players from the mid-2000s, recently competed on Fox’s MasterChef, a competitive cooking show.

Daniel Negreanu is no stranger to the big screen. Like Hellmuth, Poker Central featured a Pokerography show on him. Netflix is currently airing “Kid Poker”, a documentary on…Kid Poker. He has also made cameo roles in a handful of films including X-Men Origins: Wolverine. The six-time bracelet winner was one of many pros who made cameo appearances in ESPN’s 2005 television series Tilt.

But, perhaps the most famous poker player movie role was in the most legendary poker movie of all-time, Rounders. The great Johnny Chan filmed a scene with Matt Damon. Mike McDermott (Damon) bluffed Chan out of a pot.

“Did you have it?” Chan asked after folding his hand.

It Was a Rough Summer

Other than the money, nothing is more important to Phil Hellmuth than World Series of Poker gold bracelets. No one in the history of the game has won more (14).

But the Poker Brat simply couldn’t get anything going at the 2016 WSOP. He only once came close to contending for his 15th bracelet (8th place finish in Event #48, the $5,000 No-Limit Hold’em championship). Hellmuth cashed just three times during the series, his worst WSOP since 2002.

Let’s hope Phil’s cameo appearance in Billions turns out better than his role as a poker player at the 2016 WSOP did.