Phil Hellmuth has a record 15 WSOP bracelets, nearly $23 million lifetime in tournament cashes, and is a member of the Poker Hall of Fame. But he doesn’t seem to get much respect from younger poker pros. Even Daniel Negreanu is highly critical of his game. CardsChat spoke with the Poker Brat to hear what he has to say about that lack of respect and clear up the air on his relationship with Kid Poker. 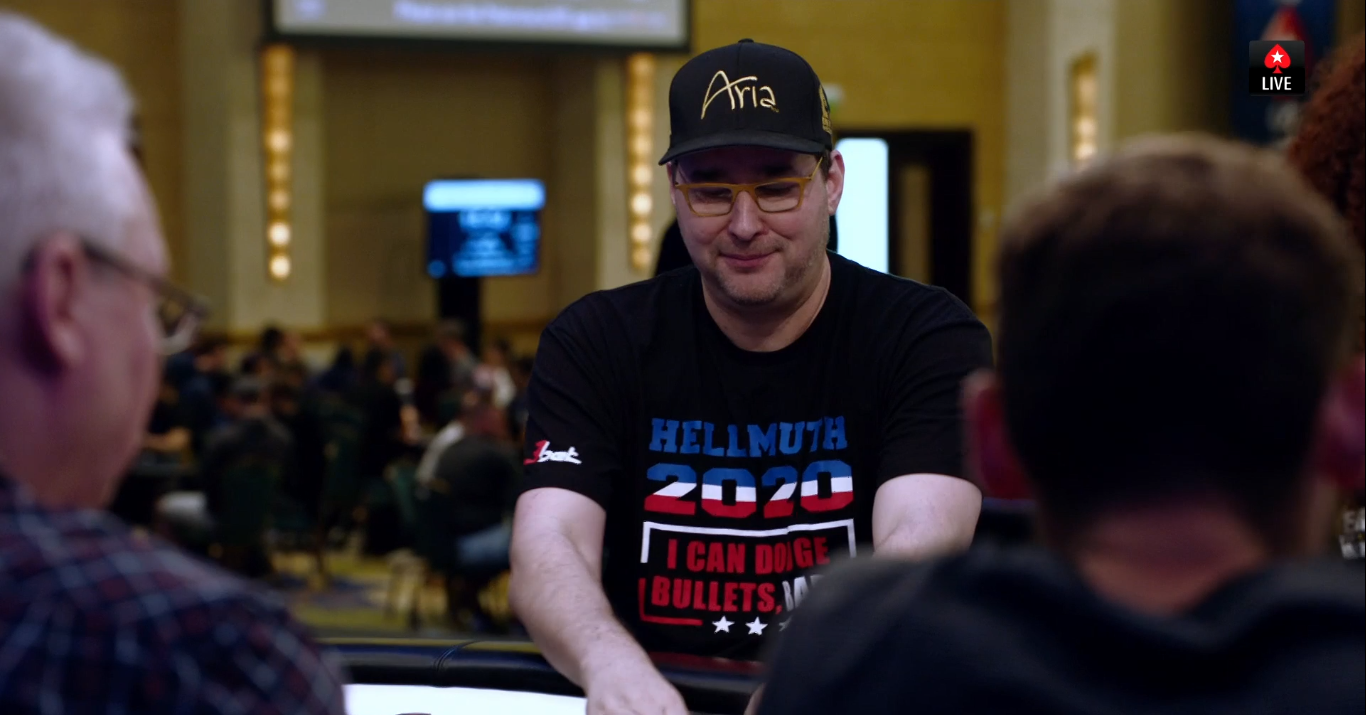 Might Phil Hellmuth be the presidential candidate who can defeat Donald Trump? No, but that campaign sure would be entertaining. (Image: Twitch)

Hellmuth busted from the $25,000 PokerStars Players Championship yesterday on Day Two and is now getting ready for the DraftKings Sports Betting National Championship in New Jersey. He will be competing for his share of $2.5 million and also helping to promote the event.

“It’s going to be an incredible event,” he told CardsChat. “And it will take a lot of guts to go deep in this.”

Hellmuth and Negreanu will always be interlinked. During the poker boom era – poker’s heyday – those two were the most recognizable names in the game. They’ve combined to win 21 WSOP bracelets and also more than $60 million in cashes.

But it’s also no secret that Negreanu has been critical of Hellmuth’s play, especially in recent years. He’s ripped Phil’s poker skills on Twitter numerous times. So, is there some animosity there between the poker legends?

“I have a great relationship with Daniel,” he claims. “When I saw Daniel posted on Twitter that he’s making out his wedding guest list, I immediately sent him a text to see if I’m on the list. He text back to let me know that I’m first on his poker list.”

While Hellmuth respects Kid Poker and considers him a friend, he had some criticisms for Negreanu.

“Daniel and I get along great but sometimes he’s a bit delusional about my play,” the 15-time bracelet winner said. “Back in 2008 he told me I’d never win again playing the way I do. He said, ‘you have to learn what the new guys are doing.’ And he said last year I have to learn GTO. But here I am, still winning. So, yeah, he’s delusional when it comes to my game and sometimes even his own.”

Can He Still Compete at Highest Levels?

Phil Hellmuth is never short on confidence. He claims he is “the best no-limit Texas hold’em player of all-time.” And while that is subjective, he certainly has the resume to at least put him in the conversation.

But the game of poker, especially at the high-stakes level, has evolved into an analytical game (game theory optimal). Hellmuth, however, refuses to adapt with the times. He believes his game can crush GTO.

“I don’t play GTO,” he said. “I play a game that beats GTO. These guys are always floating the flop with nothing and I love that. So, what I do is I hammer the flop and turn like I have the nuts and they usually fold.”

Hellmuth claims GTO is “dying off” and that pros are ditching the strategy, including Negreanu.

Winning the $5,000 No-LImit Hold’em (Turbo) event to wrap up the 2018 WSOP briefly silenced some haters. He proved his days of winning bracelets aren’t over. Hellmuth has been so dominant over the years in WSOP events that even if he never wins another bracelet, he might still hold the record when he dies.

Hellmuth’s 15 WSOP titles is five more than anyone else. Johnny Chan, Doyle Brunson, and Phil Ivey are stuck at 10.

It’s no secret that the young high-rollers in poker aren’t big fans of the Poker Brat. Players such as Fedor Holz, Steffen Sontheimer, and Dan “Jungleman” Cates don’t publicly praise Phil’s game. But according to Hellmuth, they respect him more than we think, but with a caveat.

“I’ve spoken to many of those younger players privately and they tell me I’m a great player but they feel I don’t give them enough credit,” he claims. “So, ripping on my game is probably their way of getting back at me.”

Hellmuth, to his credit, is one of the few poker boom era stars who still wins tournaments. He believes the reason most have fallen off the map is, “their style of play worked well back then but doesn’t translate to winning poker today.”

“Most players don’t last 20, 30 years,” he said. “They hang around for a while and then are gone. But there are some players that will surprise me and reappear. Michael Mizrachi is one. He had disappeared for four years and I never thought we’d see him win again. But he came back and won the ($50,000 WSOP Poker Players Championship) last year.”

Still Passionate About the Game

Don’t ask Phil Hellmuth if he still considers himself a poker player first.

Touche, Phil. But he doesn’t play as often as most pros. Except for during the WSOP, he appears more focused on other things such as business ventures and promoting events like the DraftKings Sports Betting National Championship.

“Look, when the summer time comes, my business partners know my focus is on poker.”

But he’ll probably add a few more bracelets to his trophy case before it’s all said and done. And the haters will still hate. Laugh all the way to the bank, Phil.

My favorite Poker Pro Tilt Player 😀
I admire Phil because he has 15 – time WSOP Bracelets and this is insane.
Maybe his arrogance has not allowed him to win another bracelet, but I think he is a very interesting player and I would like him to play more frequently. He is a poker show man. Poker need him.

I really love his game and He is on my top 5 poker players.

probably? I would say that surely Phil will add a couple more bracelets to his trophy case. Hahaha and no matter what others say, he is the best! and will continue to be for a long time.