It was there he imparted trading advice, talked about managing risks, and divulged how he avoids going on tilt. 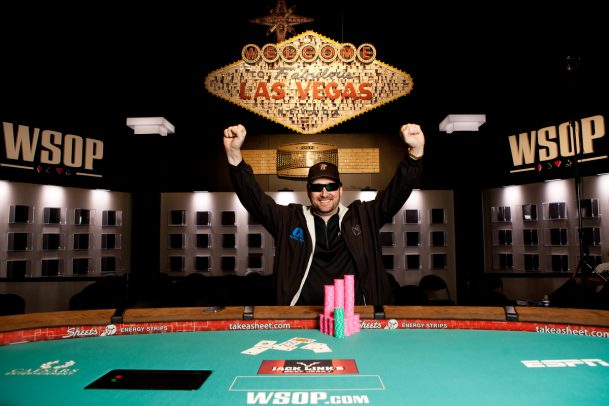 Would you rather take poker or trading advice from 14-time bracelet winner Phil Hellmuth? He gave a little of each on the Odd Lots Podcast. (Image: WSOP)

The Odd Lots Podcast is focused on hot topics in markets, finance and economics. On the show, Hellmuth drew some parallels between poker and trading and offered a three-word mantra for traders: “Risk less money.” Other than that, he avoided trading specifics while letting slip some juicy poker tidbits.

For example, in the $300,000 Super High Roller Bowl, which he busted two days ago as the result of a nasty cooler, Hellmuth divulged that he only had a fraction of his own action.

“There’s a series of six poker tournaments I’m about to enter and I needed to raise $667,222, a very specific number,” Hellmuth said on the podcast. “I emailed my friends, I raised it in four hours to play poker tournaments. It’s a very high-risk investment including a $300K, but you know, I’ll probably get criticized because I’ll probably have 25 percent of myself in those tournaments opting to look a little bit more like a hedge fund by taking a 15 percent freeroll and then putting some of my own cash in.”

He also claims to have made his investors a great deal of money.

“Over the years, I’ve probably had 50 people invest money,” Hellmuth revealed. “There’s one or two that are losing, and maybe they’ve lost a combined total of $70,000. On the other hand, I’ve made $4 or $5 million dollars for everybody else. I try to invite anybody who’s lost into my next deal … I could have raised a million dollars in four hours if I wanted to. Of course, that will all go away if I’m not successful. There’s a lot of pressure on me because I took my friends’ money.”

Who exactly are those friends? Hellmuth didn’t say, but it’s safe to assume some come from the “Masters of the Universe” poker game he talked about in his recent exclusive interview with CardsChat.

In one of the more entertaining segments on the podcast, host Tracy Alloway asked Phil Hellmuth about the frequent criticisms he faces from online poker players.

“I do love that question because it opens up a whole kind of fun can of worms for me,” Hellmuth responded. “You have to understand these guys are some really great players out there that are completely mathematically based. They come up with amazing, elegant theories and it’s kind of fun to watch and see. But I can read their elegant theories in ten minutes.”

Hellmuth continued: “What they can never have, what I have, they can never have, you can’t buy it. It’s not for sale, and that’s great reading ability, which I sometimes term as ‘White Magic,’ only because ‘Black Magic’ sounded like it was so negative. I didn’t want to be known as some wizard doing black magic.”

Other quips that stuck out in the conversation were Hellmuth claiming he could have 28 WSOP bracelets, he thinks Mike “The Mouth” Matusow is the best Omaha eight or better player in the world, and that he’s writing a book on positivity.