Phil Galfond — aka “OMGClayAiken” online — took his Run it Once (RIO) poker site software for a test drive this week, showing off the features he feels will set his project apart from the competition. Spoliler alert: it’s for international player pools only and not for US-based players at this juncture.

Challenging times: Phil Galfond’s new Run It Once software will be of interest to poker players, but Americans need not apply for the foreseeable future. (Image: HighstakesDB)

Galfond — whose total live tournament earnings are at $2.9 million now — is pushing his ambitious new project, with the goal of returning some trust and legitimacy to a sector who have become jaded and distrustful of online poker sites.

First, the big announcement – Galfond revealed that RIO won’t hit its stated launch goal. But there is some good news for those dying to get in on the action before then.

“It’s become pretty clear that we’re not going to have a full, public launch by September 22,” Galfond says in a promotional video. “But what we will have is a lot of players playing for real money in our private beta.”

He’s inviting anyone not US-based and interested in becoming a beta tester to sign up through runitonce.eu, and he’ll randomly select 1,000 participants to start taking part in cash games on the site starting this month.

Devil’s in the Details

RIO’s custom-built software will have some unique features. 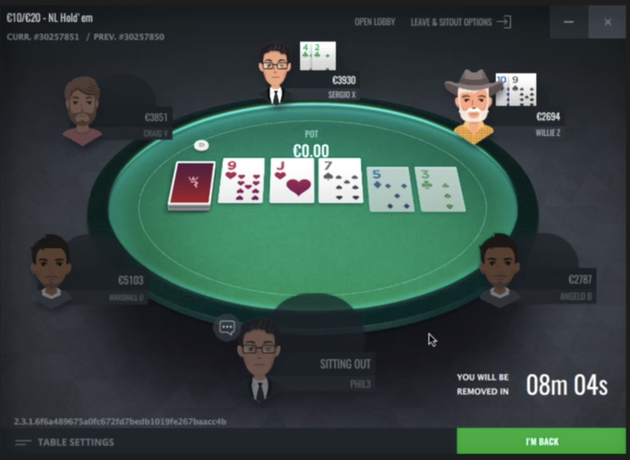 The first thing that stands out is the “slanted” view of the cards. Rather than the top-down table view — which is standard in the industry — the cards appear to be angled, as if you are seated at the table.

He also provides a first glimpse of the so-called dynamic avatars, which are meant to act as a replacement for a heads-up display (HUD). While almost every online poker site allows HUDs, Galfond already announced that it’s not something that will be allowed on his site.

Another unique wrinkle is that there will be no traditional chat box, although users will be able to communicate through a pre-set selection of emojis and phrases such as “LOL” and “OMG.”

He also revealed that RIO’s player-tagging system will be different from the industry standard.

“Why make just a little note tag with a color? We just made it more fun and changed (the avatar’s) shirt color.”

While RIO wants feedback from its beta testers, it’s also shown a willingness to listen to any comments from the public.

Most of the feedback from the video focused on the unique “slanted card” view.

“It looks too playful, if that makes sense,” said one commentator. “The slanted cards I get, because it’s like how you see them at a live table, but they are way too slanted.”

“+1000 on the tilted card view,” agreed another. “It’s very distracting and tough to see, especially when multi-tabling.”

Others pointed out that Galfond has done an exemplary job of listening to feedback so far, and that probably won’t change when it comes to the card view.

“There will most likely be an option to change the display of cards on your screen,” responded one viewer. “Give it a rest everybody.”

I find it rather weak.
I think online poker, simplicity,
contains only basic information,
you should strive for clean software,
just like PokerStars.
The relative speed of the game is not
makes possible anything other than the particular situation
analysis and decision-making.
There is no need for anything else.