It almost sounds like Phil Galfond wants to run for president, with a slogan of being “fair, honest, and transparent.” But the vision really just applies to the high stakes pro’s vision for a new poker site he discussed this week on his blog Run It Once. 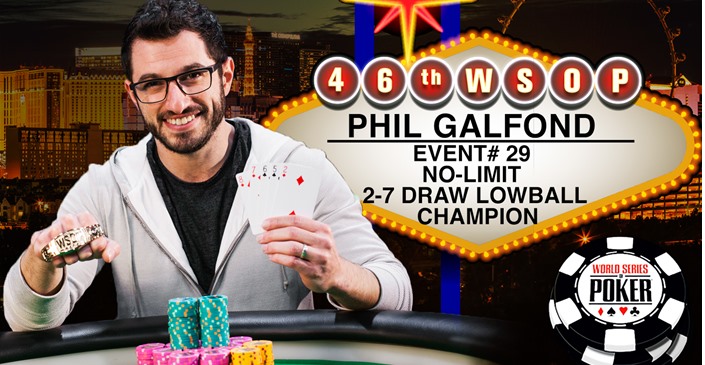 Former WSOP bracelet winner Phil Galfond wants to use his experience to launch a new poker site that values all players. (Image: WSOP)

Galfond, who lives in Maryland and has almost $2.5 million in live tournament winnings and claims just under $8 million for his online takedowns, says he wants to create a new poker platform. But he wants it to pass the Boy Scout test for ethics and fairness, and he wants it to be usable by players from beginners to pros.

More Than a Brand

Outlining his vision for a site that values poker players from the casual to the professional, Galfond explained that he’s willing put his reputation on the line and “give it [his] best shot” in order to create something for everyone.

Pros launching online poker sites is not a new concept, of course. Back in the golden age of online poker, Doyle Brunson, the recently deceased David Ulliott (aka Devilfish), and Johnny Chan all had their own branded platforms.

In more recent times, Phil Ivey has toyed with the idea of launching his own poker site (although he never got around to doing it full-fledged), but it seems Galfond will be taking a more active role in his project.

Instead of just slapping his name on a pre-existing product, the WSOP bracelet winner is looking to build a site from the ground up. A monumental task by anyone’s standards, Phil is well aware of the risks, but believes his background in the game will give him a strong foundation to start.

Although Galfond hasn’t set a date for the launch of his new site, he will be discussing his plans with the community via forums over the coming months.

What’s the motivation behind Galfond’s latest move? Aside from his own personal mission to create a site that values every player, it could simply be a reaction to the current state of online poker. With major operators like PokerStars and 888poker moving ever closer to the casual end of the spectrum, established pros like Galfond are starting to feel left out.

Reductions in betting limits and VIP rewards may have helped to create a more appealing package for novice players, but for seasoned grinders, the incentives to ante-up are slowly decreasing. Galfond wants to reverse this trend, while continuing to offer a service that caters to novice players as well.

“[The site] should value the professional for embodying the dream that brings so many people to poker. For proving that poker is a game of skill. For promoting the game of poker to their fans, students, followers or subscribers,” Galfond wrote on Run It Once.

Theory and reality are two different things, however, and there will be a number of hurdles for Galfond to clear if he’s to create a site that’s fit for all.

From something as simple as choosing a software supplier to obtaining a license to operate in certain regions, Galfond faces an uphill battle. But if there’s one player who could pull off such a feat, it’s a man who has managed to stay at the top of the online game for almost a decade.

I wish good luck for Phil Galfond. It would be desirable to know that new to the created website Phil Galfond can offer