Another Huge Day for Phil Galfond in the Galfond Challenge, Battle Tightens Up

Phil Galfond is still well behind “VeniVidi1993” in the first Galfond Challenge match. But after another banner day on Saturday that saw the Run it Once founder rack up a six-figure win, he’s closing in on his opponent with plenty of hands remaining in the challenge. 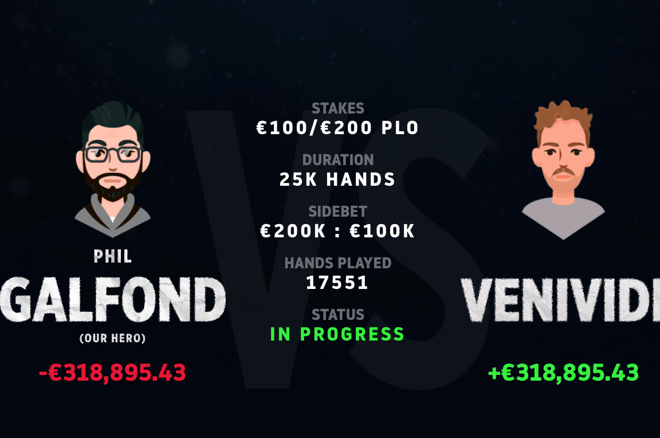 Phil Galfond is in the midst of an impressive comeback. (Image: Twitch)

Galfond, considered one of the top PLO players ever, challenged all comers in his game of choice. Well, those who are willing to play heads-up at the high-stakes level and risk potentially millions of dollars. He opened the challenge with a 15,000-hand match against online grinder “VeniVidi1993.” He’ll face some additional competitors over the coming months including Bill Perkins and Luke Schwartz.

But for now, he’s locked in a tough battle against a skilled opponent who just might be the better player.

Can Phil Galfond Pull it Out?

When Phil Galfond took a break from his match against “VeniVidi1993” last month, he needed to clear his head. And who could blame him? He was down over €900,000 and it appeared that the deficit was too much to overcome.

Galfond returned from break on March 4 and has dominated the challenge since. In his most recent match — Saturday — he racked up a €140,979 profit in the €100/€200 PLO cash game session on Run it Once in 503 hands. The session was supposed to continue but “VeniVidi1993” had enough of the beating he was taking and called it a day early. The PLO greats will return to the virtual felt on Monday. You can watch every hand on the Run it Once Twitch channel.

Although it may seem like Galfond is down a massive amount, it’s sure an improvement over what it was a month ago. Since the three-week break, Galfond is up nearly €600,000.

With that said, he still must average winning nearly €43 per hand the rest of the way to win the challenge. That’s about the equivalent of profiting one big blind every five hands, on average. Galfond is talented enough to pull it off, but it won’t be easy. Especially against a formidable foe such as “VeniVidi1993.”

I watched several times the stream of their game. Very interesting to watch.

it will be very interesting to learn about the results of this fantastic challenge.
I don ‘t even know who to root for…