A new twist in the mystery surrounding Phil Galfond’s New York City apartment slide has emerged, as the former eccentric adornment made an appearance recently on Craigslist. 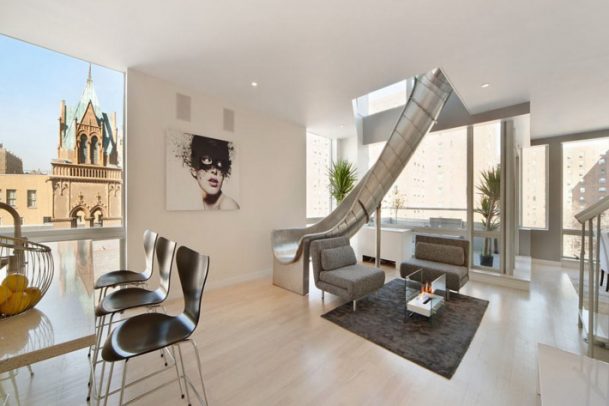 The lower level of Phil Galfond’s former New York City apartment with the infamous slide in the middle of the living room. The slide is no longer in the residence and was recently posted for sale on Craigslist for $15,000. (Image: New York Magazine)

A posting on the classified ad website offers the slide for $15,000, and even provides an option for local delivery. And it claims the possibilities are endless for what the lucky buyer could do with the odd paraphernalia.

“This is an architectural, custom-made stainless steel slide for a duplex penthouse apartment, recently dismantled and sitting in storage,” the post reads. “The slide has been engineered and hand-fabricated in Germany. Also, approved by the local building department. The slide dissembles into three sections. It could be installed as a pool slide, tree house, etc.”

Just like Galfond, the apparatus is no longer in Manhattan, having been moved to a warehouse in Long Island City, Queens. How long it has been there and when it was taken out of the poker pro’s former apartment are questions that remain unanswered.

When the two-time World Series of Poker bracelet winner went apartment hunting in 2008, he settled on the East Village and found two penthouses in a newly constructed development, closing on his place the same year as his tournament victory.

The 2,400 (combined) square-foot units, with a total of four bedrooms, were stacked, and Galfond paid $3.14 million for the pair (a bargain by Manhattan standards any day of the week). He initially connected the two condos with an Italian staircase, but later decided he wanted something a bit more unconventional to descend from the upper to lower level.

The poker pro had the distinctive slide created the following year and it was completed in 2010. The 18-foot slide was made of stainless steel into a half-tube design and had custom glass railings. The architect, The Turett Collaborative, did not disclose the cost.

The Maryland native, who started his own poker site last year, didn’t have much time to enjoy his new digs. He sold the residence in 2012 to a Canadian software developer for $3.3 million.

The new owner indicated at the time of the sale he had no use for the unusual slide and was going to discard it.

“He plans on inviting all his friends to America for a slide party, and then he wants to donate the slide to a children’s museum or to a charity,” said listing broker Elizabeth Kee.

Whether that happened or not remains a mystery. The fancy decoration was missing in action for several years, as people lost interest in its fate.

That is, until it turned up on Craigslist a week or so ago. As of Wednesday, the ad was still up. If anyone wants an ancillary piece of poker history and an interesting conversation piece, it’s still available as of this writing.