Phil Galfond Gets Some Back, Still Down Big in Galfond Challenge
October 29, 2020 Online Poker

Galfond Gets Some Back, Still in a Deep Hole Against Chance Kornuth

Phil Galfond has bounced back a bit after racking up a massive deficit in the Galfond Challenge, but he’s still well behind Chance Kornuth in the early stages of a Pot-Limit Omaha competition that will likely last a few months. 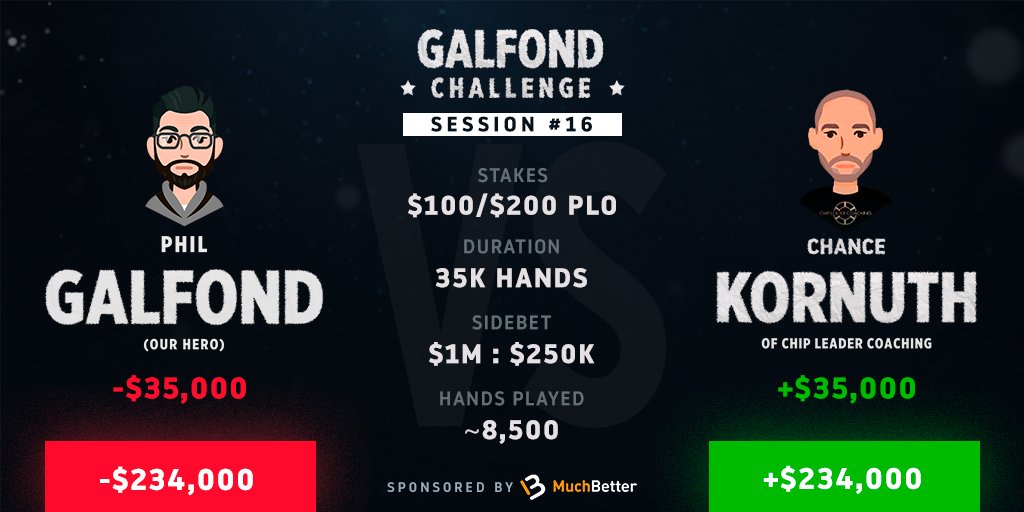 Phil Galfond has shaved a bit off his deficit against Chance Kornuth. (Image: Twitter)

Just a couple of weeks ago, Kornuth was taking a beating against a fierce competitor. Some poker players on social media even questioned why he ever took on such a difficult challenge against, possibly, the best PLO grinder in history.

That’s not to say Kornuth can’t play. He’s a world-class player himself, and his three WSOP bracelets and great online poker success speaks for itself. But 35,000 hands of PLO against a PLO legend at $100/$200 stakes with a $250,000 side bet (4-1 odds on that side bet, however) is a tough task for anyone.

At this point, it appears the challenge may not be quite as insurmountable for Kornuth as some may have thought. Galfond went from up $280,000 to down nearly $300,000 in a matter of five sessions, two of which were $150,000 losses. He’s now the underdog after starting the online poker contest as a heavy favorite. On a positive note for the Run it Once poker site founder, he got some chips back recently.

After five consecutive rough sessions, Galfond stopped some of the bleeding on Tuesday with a nearly six-figure profit. He chipped off over one-third of the deficit he ran up. Kornuth responded on Wednesday, booking a moderate win of around $35,000.

The online poker stars and respected poker coaches have now completed approximately 8,500 hands. That may seem like a ton, but it’s only around 24% of the 35,000 hands they’ve agreed to play on WSOP.com. Assuming neither player quits while they’re ahead or behind, the third Galfond Challenge still has another 26,500 hands remaining.

That’s the good news for Galfond, who still finds himself in a $234,000 hole. The bad news is, he’s deep in the red against a player who has proven he is more than competent at Pot-Limit Omaha.

Galfond’s been in a similar position in a previous challenge. Actually, he’s been in a much worse spot. During the first Galfond Challenge at the beginning of the year, against online poker pro “VeniVidi1993,” he trailed at one point by nearly $1 million. He took a month-long break to rest before bouncing back to eventually pull off a miraculous comeback for the ages.

This time around, he’s in a shallower hole, but may be facing a tougher opponent than he has previously.