For First Time in Galfond Challenge, Phil Galfond Ends Session in the Lead

Phil Galfond, for the first time in 35 days, has ended a session in the Galfond Challenge with an overall lead. If you counted him out back in February, you might have done so too soon. 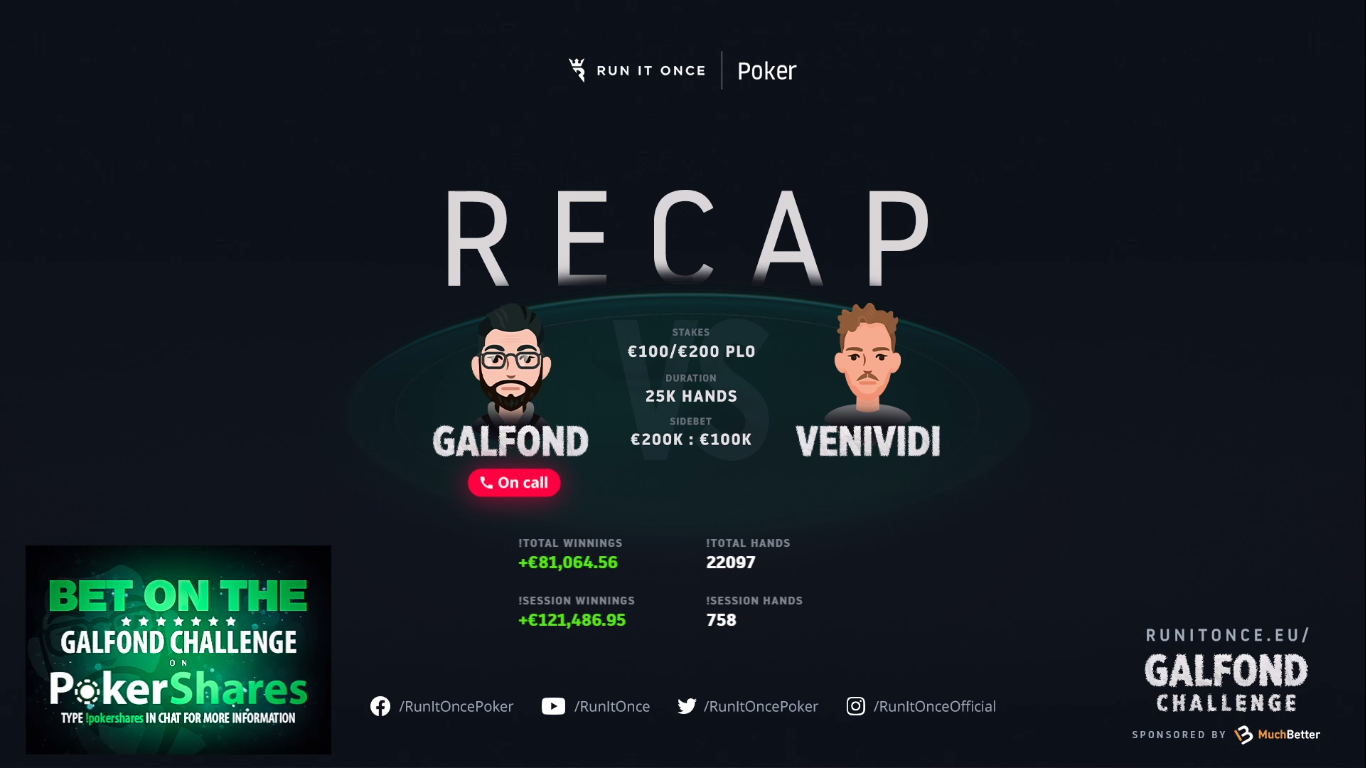 The Galfond Challenge is the best thing in poker right now. (Image: Run it Once)

Don’t call it a comeback, he’s been here for years (if you don’t get that reference, you obviously weren’t a 90s kid). Galfond trailed in February by €900,000 to the challenger, “VeniVidi1993.” The two online pros are playing 25,000 hands of Pot-Limit Omaha at Run it Once, the poker site founded by Galfond. At the end of the match, the loser is to pay the winner a six-figure side bet.

Just one month ago, it appeared the former Full Tilt Poker legend was down for the 10-count. My, how things have changed in the past month.

Galfond Challenge is the Best Thing in Poker Right Now

If you haven’t been following the Galfond Challenge, you’re missing out on a classic. “VeniVidi1993,” a player whose real name and location is unknown to the public, was pushing a €1 million profit at €100/€200 stakes in February. Galfond needed a break to regroup and decide if he should even continue the challenge.

Few could have blamed him for throwing in the towel. Other than Gus Hansen (who lost over $20 million online), what sort of masochistic freak would want to sit there playing online poker, taking a beating day after day, losing millions. But Galfond remained confident in his game and refused to give up.

He reentered the Galfond Challenge in early March and has dominated the match ever since. On Monday, he finally finished in the black.

More than 3,000 fans watched the Galfond Challenge on the Run it Once Twitch channel on Monday. During that session, Galfond turned a €121,486 profit, his fourth most profitable day in the competition. And with that, Galfond now holds the overall lead (+€81,064), the first time in 35 sessions that he’s finished ahead overall.

The talented PLO players have now played 22,097 hands in 35 sessions. With just 2,903 hands remaining, “VeniVidi1993” is now a big underdog for the first time. It’s almost hard to believe the turnaround we’ve seen in this contest given how deep in the hole Galfond was midway through the challenge. But there’s so much variance in Pot-Limit Omaha that streaks aren’t uncommon, as we’ve seen in this back-and-forth high-stakes battle.

Galfond’s lead certainly isn’t insurmountable. “VeniVidi1993” trails by the equivalent of four buy-ins, and there are plenty of hands left to play for him to regain the lead and win the Galfond Challenge. But the poker fans on social media sure won’t be rooting for it to happen.

You can watch tomorrow’s stream live in its entirety on the Run it Once Twitch channel beginning at 11 am ET.

Incredible resilience to come back from such a big loss. Goes to show the swings in HU PLO though