Phil Galfond is on Fire, Leads Namesake Challenge by 17 Buy-Ins

Phil Galfond has completely taken control of his heads-up battle against Chance Kornuth, and now leads the heads-up poker match by a country mile. But variance is still in play, meaning the outcome of the 35,000-hand match is still in question. 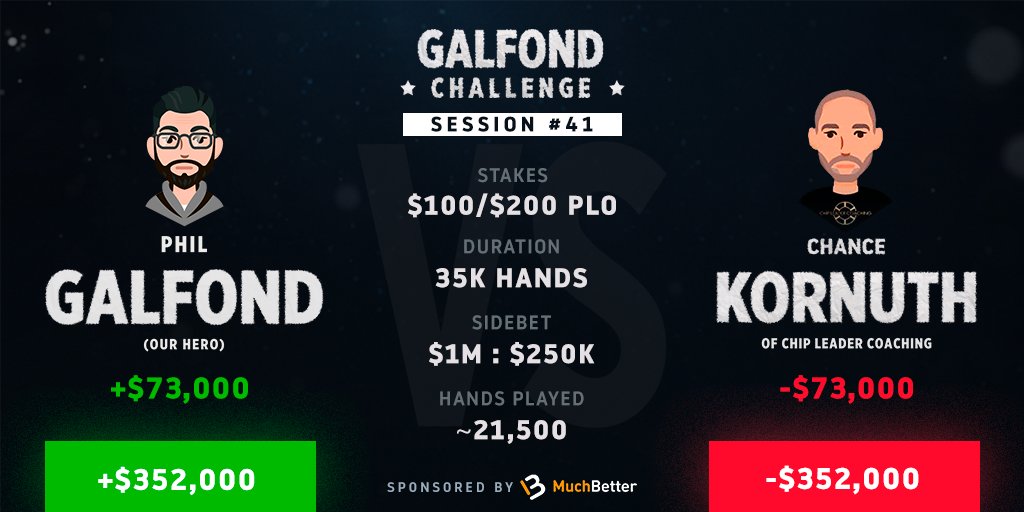 Give Phil Galfond credit for battling through some tough times. (Image: Twitter)

Persistence, discipline, and patience have paid off for Galfond. But, that shouldn’t come as much of a surprise to anyone who has followed his brilliant poker career.

The Run it Once poker site founder took a beating from an extremely talented opponent for a couple of months in this iteration of the Galfond Challenge. Kornuth won consistently for the better part of 10,000 hands against, arguably, the top Pot-Limit Omaha player ever. And he’s still just one heater away from getting right back into the match.

Few expected Kornuth to win the Galfond Challenge, a $100/$200 online PLO battle on WSOP.com. Hence, the reason he was a 4-1 underdog heading into the competition. Like in sports, poker isn’t always predictable. The Chip Leader Coaching founder ran hot and outplayed his opponent for quite some time. At one point, he led by nearly $350,000.

But, Kornuth appears to have used all of his run good — at least for awhile. Galfond flipped the script the past few weeks, most recently booking a $73,000 win on Friday, and taking an overall lead of $353,000. That’s the equivalent of just more than 15.5 buy-ins.

Kornuth and Galfond have played approximately 21,500 hands or about 61% of the match. With more than half the battle in the books, Kornuth is quickly approaching the point where he has little, if any, margin for error moving forward.

He still has time to turn things around before the 35,000-hand mark but, if he falls further behind over the next few sessions, he’ll be in a world of trouble. The good news for the three-time WSOP bracelet winner is that he has the talent and the skill to compete at a high level, and to come back from behind. Realistically, it will only take a few massive pots for Kornuth to get back in the game. If those massive pots go the other way, however, the deficit may get too big for him to overcome.

There’s plenty more at stake for both of these players than the money won and lost in the cash game sessions. The winner is owed a side bet, which would cost Galfond $1 million should he lose, and Kornuth $250,000 if he suffers a defeat.