Phil Galfond extended his lead over “ActionFreak” in the Galfond Challenge, thanks in part to a massive pot late on Day 8. 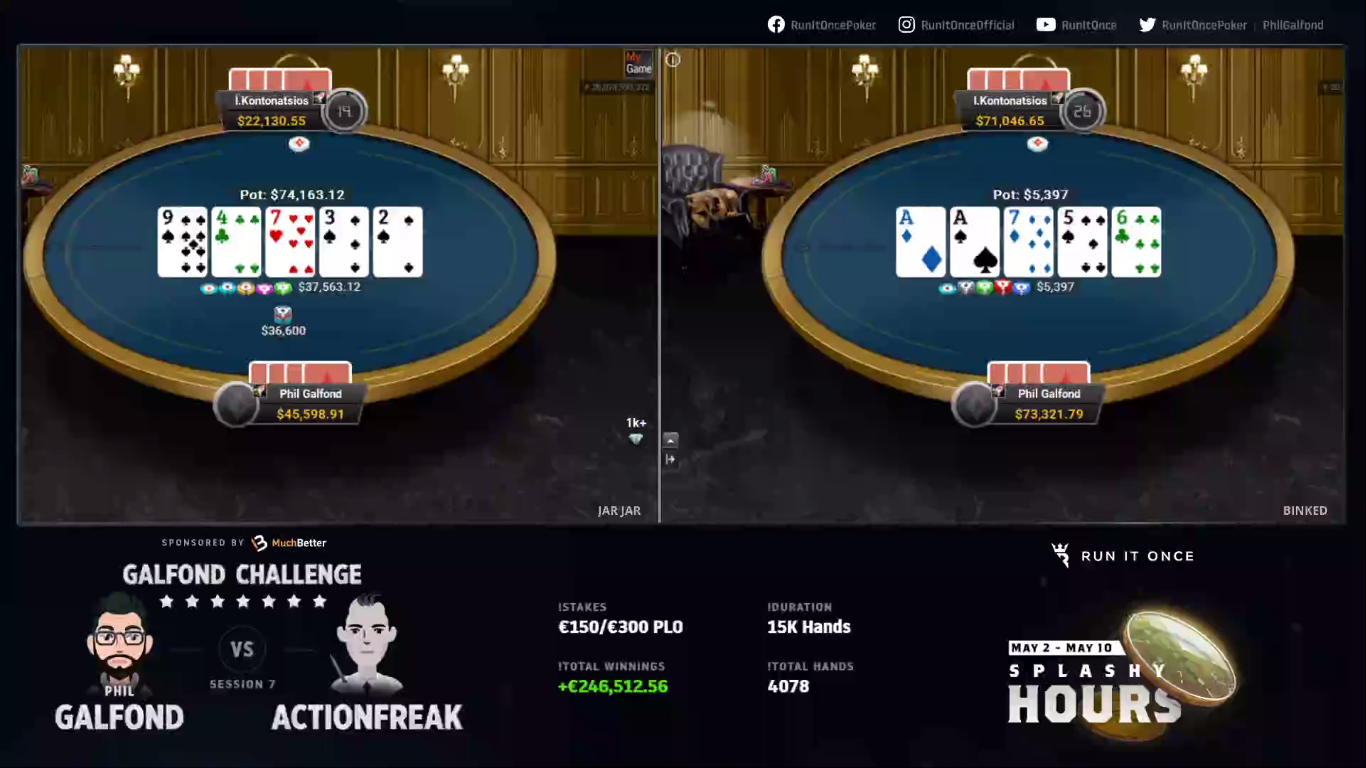 Phil Galfond will take a huge lead into Day 9 of the Galfond Challenge. (Image: Run it Once Poker/ Twitch)

The two talented poker players are competing in a 15,000-hand PLO challenge at €150/€300. The competition recently moved from Galfond’s Run it Once site to Partypoker due to “ActionFreak” having issues funding his account.

Through the first two sessions on Partypoker, “ActionFreak” chopped off nearly half of the previous €410,000 deficit. But it’s been mostly downhill for him over the past two sessions. The good news is, he still has plenty of time to mount a comeback. And it’s not like we haven’t seen an incredible comeback in a Galfond Challenge already.

Galfond picked up a small win, around €25,000, on Day 7, bringing his lead to nearly €270,000. He then turned up the heat on “ActionFreak” on Saturday, booking a huge win in lengthier-than-normal session.

Although the final result was impressive for Galfond, he didn’t dominate the entire session. He led by over €200,000 at one point in the session, but then that crazy thing called variance kicked in. “ActionFreak” went on a heater for nearly two hours, cutting the session deficit to around €20,000. Then, variance again swung back the other way.

Galfond can thank one of the last hands of the 6.5-hour session for his massive win. In the costly pot, “ActionFreak” faced a board of 9-4-7-3 on the turn read and bet the pot (€4,173) from the button. Galfond paused for a moment before check-raising the pot to €16,694.

When the deuce of spades landed on the river, a potential flush was out there. That didn’t deter the poker site owner, who put his opponent all-in for €22,130. “ActionFreak” went into the tank before deciding the pot was too big to give up. He made the call with a set of fours. Galfond turned over the nut flush, but had also turned a straight (5-6-J-A).

He then won another small pot on the second table to wrap up the session with a €165,093 win.