Phil Galfond entered Thursday’s 15th session of the Galfond Challenge against “ActionFreak” on a downswing. He left the virtual felt six hours later after completing one of his biggest winning sessions. And the momentum has now shifted back in his direction. 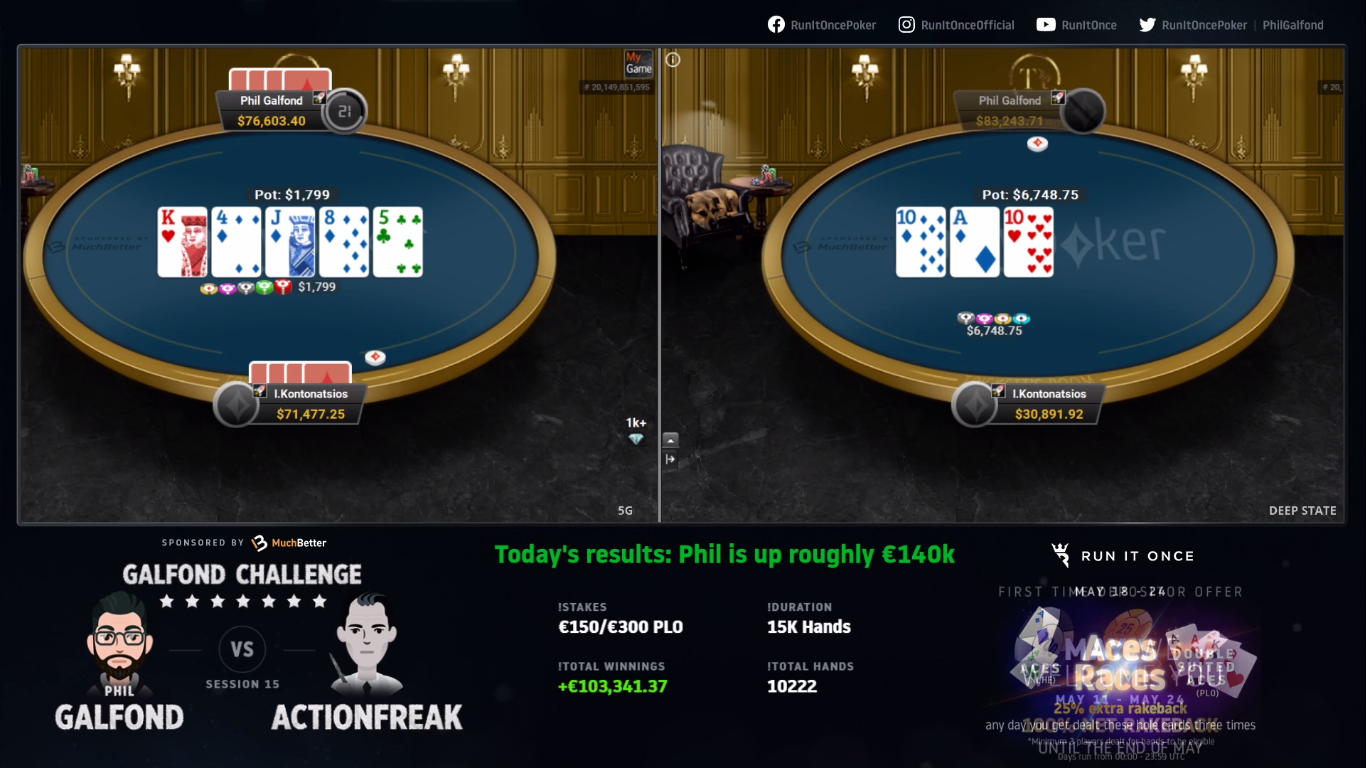 Phil Galfond answered back in a big way with a resounding win on Day 15 of the Galfond Challenge. (Image: Twitch/Run it Once Poker)

After leading at one point by €430,000, Galfond posted losses in three of the previous four sessions, and his lead took a nosedive. Heading into Day 15, the Run it Once founder’s advantage was down to “just” €103,000. That’s still a sizable deficit for “ActionFreak,” but certainly more manageable than it was a couple weeks ago.

But that all changed on Thursday, and Galfond’s big day that now makes him a huge favorite to win his second Galfond Challenge.

Since the Galfond Challenge moved from Run it Once to Partypoker on May 11, it’s been a bit difficult to track exact totals from each session, at least until they’ve officially been tallied. On Run it Once, Galfond was able to keep a running tally of each hand.

So, while we don’t have exact figures from Thursday’s lengthy session, we do have a solid estimate — and Galfond won approximately €160,000 in more than 750 hands. He now leads the 15,000-hand competition by approximately €270,000. The online poker stars are competing in a high-stakes Pot-Limit Omaha challenge at €150/€300 stakes. After all of the hands are complete, the loser must pay the winner an additional €150,000.

As it stands, Galfond is in the driver’s seat to win that side bet. The talented PLO players have now completed approximately 11,00 hands or about 73% of the challenge.

Galfond is in the midst of his second Galfond Challenge. In his first battle, against “VeniVidi1993,” he pulled off one of the greatest comebacks in poker history, rallying from a €900,000 deficit to take it down on the final day. This time around, he’s in a different position, leading nearly the entire time.

“ActionFreak” and Galfond will return to the virtual felt for Day 16 on Friday. You can catch the action live in its entirety on the Run it Once Poker Twitch channel.