Day 10 of the Galfond Challenge against “ActionFreak” didn’t lead to a massive profit for Phil Galfond. But the small win he booked — €19,003 — shifted the momentum back in his direction. 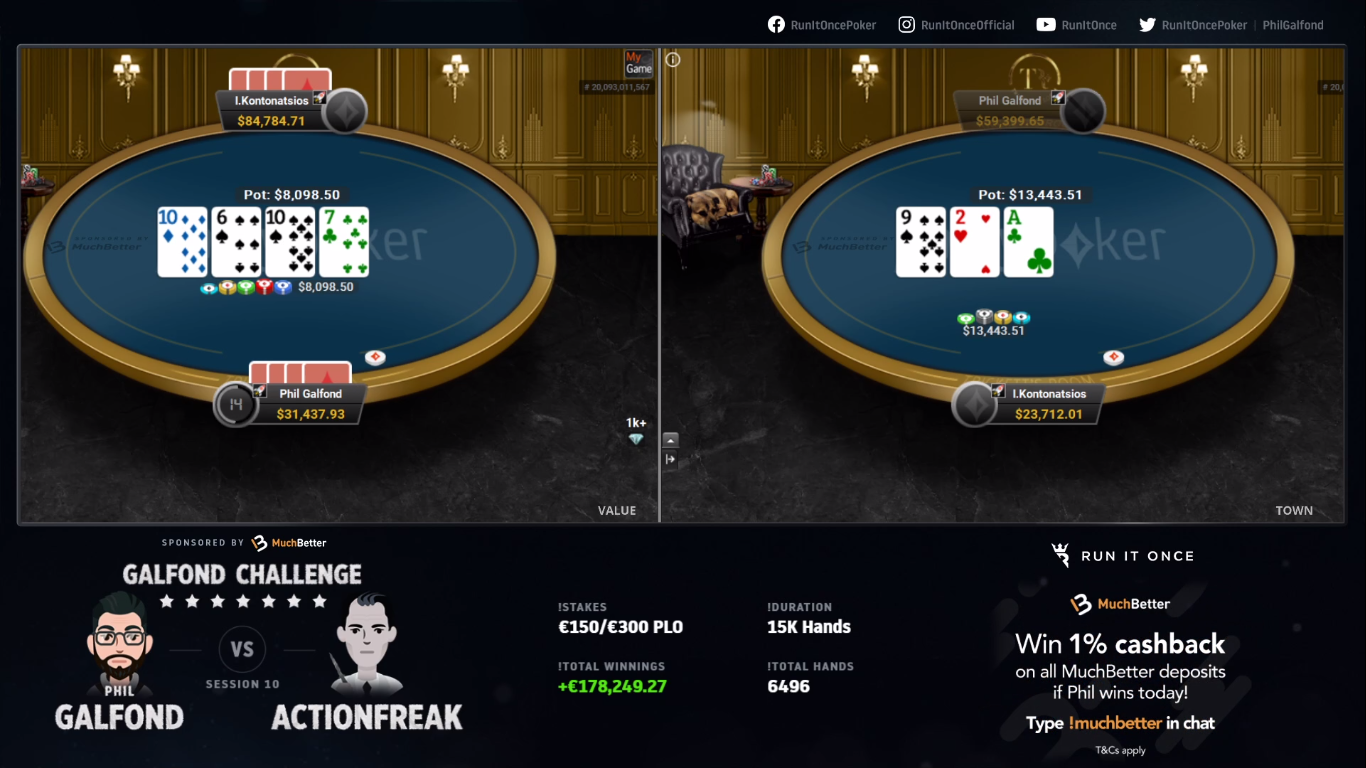 Phil Galfond had a small, but important, winning session on Day 10 of the Galfond Challenge. (Image: Twitch./Run it Once Poker)

“ActionFreak” is an online pro who resides in Greece. His identity, much like Galfond’s last challenger (“VeniVidi1993”), is unknown publicly. According to the HighStakesDB internet poker rankings, his PokerStars account has turned nearly a $1 million profit over the past three years. He’s played more than 107,000 hands and his most frequent game is Pot-Limit Omaha, the poker variant played in the Galfond Challenge.

With the conclusion of Tuesday’s 776-hand session, the PLO pros have now played 7,272 of the agreed-upon 15,000 hands. When the challenge concludes, the loser will owe the winner another €150,000 in a side bet.

If the challenge ended today, Galfond would be declared the winner by a margin of €197,252. But games don’t end at halftime.

Galfond won many pots out of the 776 hands played on Tuesday, but none more valuable than a cooler flop he shipped that won him a €79,398 profit.

In the costly hand for “ActionFreak,” Galfond flopped a set of jacks on a 5-K-J board. When the intense barrage of betting concluded, “ActionFreak” turned over a set of fives. After the board ran out 8-3, there was no possibility for a straight or flush. So, Galfond didn’t have to worry about losing to those hands, making his decision to shove on the river that much easier.

Galfond trailed at one point in the session by around €100,000, but was able to bounce back like he’s done so many times before. The Galfond Challenge began on Phil’s Run it Once poker site, but was forced to move to Partypoker due to “ActionFreak” being unable to quickly move enough money to RIU. The remainder of the challenge will take place on Partypoker.

The PLO stars will take a day off to rest and then come back ready to battle on Thursday. As always, you can catch the action in its entirety on the Run it Once Twitch channel.