Phil Galfond Starting to Run Away with Galfond Challenge vs. Chance Kornuth

The Galfond Challenge is starting to turn into a blowout as Phil Galfond is now running away with the match against Chance Kornuth. But this lengthy competition is far from over. 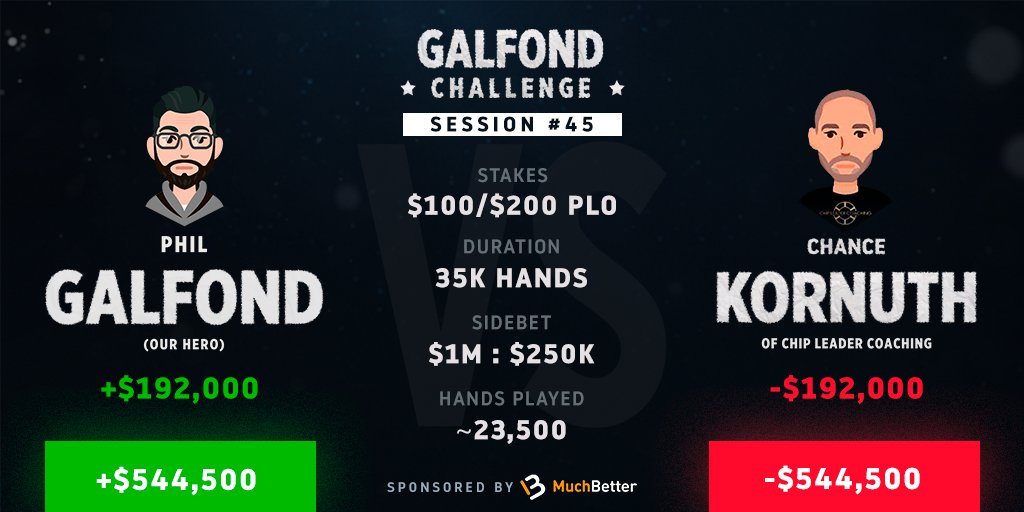 Phil Galfond is beginning to run away with the third Galfond Challenge. (Image: Twitter)

The third installment of the Galfond Challenge has taken fans on quite a roller coaster ride. And you should probably expect many more twists and turns before it concludes.

Galfond entered the match as a 4-1 favorite and laid those odds ($1 million to $250,000) on a side bet with Kornuth, the founder of Chip Leader Coaching. The favorite came out of the gates in the 35,000-hand pot-limit Omaha online competition guns a blazing. He busted out to a $180,000 lead early on a few months ago. Kornuth then took over the match, dominating for a two-month period. At one point, he led by as much as $350,000.

But the tides have turned once again over the past month. Kornuth has gone from being the heavy underdog to surprising favorite, and now back to a huge dog.

On Friday, Galfond dominated most of the match and benefited from a fortunate river card late. In the aforementioned hand (below), the flop came 5-6-2 and Kornuth bet $10,800 (size of the pot) into an already inflated pot with top two pair. Galfond, also with a 6 but holding A-A-3-6, for an over pair, gutshot straight draw and the straight flush draw, raised it to cover Kornuth’s remaining $3,800. Galfond hit his straight flush on the river and took down a crucial pot.

Here's a look at the final all-in of a fast and furious five minutes, where we saw three straight $40k pots. @Surfbum4life is calling the action on this juicy 📯 4-bet 📯pot. #GalfondChallenge pic.twitter.com/gUeZqNZ9b5

The $21,000 profit from that hand helped Galfond extend his six-figure lead even further. He added some more chips before the session concluded and now has more than a 27 buy-in advantage in the third Galfond Challenge.

Galfond has already won two Galfond Challenges over the past year and is on his way to making it three-for-three. The Run it Once poker site founder first defeated “VeniVidi1993” early in 2020 and then followed that up with a win over “ActionFreak” a few months later.