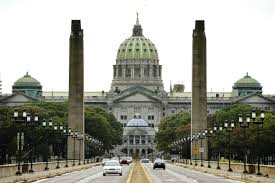 This is the first real indication that online poker regulation has powerful support in the Pennsylvania Senate. (Image: post-gazette.com)

Online poker momentum is building in Pennsylvania, and so is the pile of bills that are seeking to regulate it.

The latest, the fifth this year, is soon to be introduced by State Senators Kim Ward, Robert Tomlinson, Elder Vogel and Joseph Scarnati, and it might actually be the one to do it

While previous three bills have so far been introduced to the House, this is the first indication that a group of powerful senators are fully behind the push for regulation.

And just last week, Senator Sean Wiley also announced his intention to introduce a bill to the Senate.

While neither of the new bills have been published, the Ward / Tomlinson / Vogel / Scarnati bill will propose a wider shake-up of the state’s gambling industry, while legalizing online casino games.

In this sense, it will be similar in nature to the Wiley bill.

In a memorandum seeking support for their cause, the senators promised the bill would initiate “gaming enhancements and reforms,” including allowing casinos to serve alcohol 24/7. And it would also permit the state’s 12 casinos to offer online gambling.

“Existing Pennsylvania casinos that offer slot machine and table games would be eligible to offer Internet gaming to individual patrons that have registered and established an Internet gaming account and are physically present in the Commonwealth of Pennsylvania while playing online,” said the memo.

“In addition, the Pennsylvania Gaming Control Board and the Department of Drug and Alcohol Programs would be required to develop expanded compulsive and problem gambling programs specifically related to Internet gaming.”

So far, however, there are more details available on Wiley’s bill, although the senator says the language is still being drafted.

In his own memo for co-sponsors, Wiley says his bill would see online poker legalized “no sooner than Jan 1, 2017, with regulations, licensure [and so on] effective no sooner than July 1, 2016.”

“My proposal would allow the PGCB [Pennsylvania Gaming Control Board] to authorize online poker only after conducting a study to determine the impact online gaming would have on existing brick and mortar casinos,” said Wiley last week. “This would effectively grandfather Pennsylvania in should there be changes to federal law re: online gaming.”

I am from PA and I am glad they are making progress so that us Pennsylvanians can soon legally play online poker. I know that it will be through our local casino’s but that is a step in the right direction. I hope that one day we will be able to play online poker with any poker site on the web. That would be a great day for USA players.