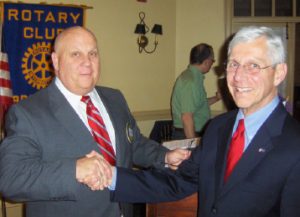 These are turbulent times for online gambling in America, where it seems that bills for and against are drawn up and shot down on a monthly basis. However, Pennsylvania’s poker players have cause to be optimistic this week, following the news of State Senator Edwin Erickson’s efforts to legalize the online game in the state. Erickson has formally announced his intention to introduce Senate Bill 1386, which, if passed, will set the wheels in motion for the full legalization and regulation of online poker.

It comes hot on the heels of a recent study, commissioned by the state’s Legislative Budget and Finance Committee (LBFC) and conducted by consultancy firm Econsult, which concluded online poker would be a huge financial boon to Pennsylvania, generating $129 million in revenue per year, if legalized. And while we don’t yet know the full details of the bill, Erickson’s announcement this week offered some brief but tantalizing insights.

Erickson says that his bill would set taxes on operators at 14% of GGR. While this is a little higher than Nevada, it’s lower than the state’s New Jersey neighbors, and is in line with the recommendations of the Econsult report which urged that, at least initially, the state should go easy on operators – positioning a low tax rate to begin with that would increase over time. This is to allow operators to establish networks and compete against unregulated offshore sites. Otherwise, heavily taxed online poker rooms would be forced to charge a higher rake than their illegal competitors, and to stint on bonuses, decreasing their appeal to consumers.

Erickson also makes it clear that Senate Bill 1386 will see to exclude “bad actors” – those sites that continued to offer gaming to US players after the passage of the Unlawful Internet Gambling Enforcement Act (UIGEA) of 2006 – a list that includes global market leaders PokerStars.

Regulation would relate to poker alone, drawing a crucial distinction between poker and games of chance played against the house. Poker, he explained, “is unlike banking games in many respects that make it best for the introduction of interactive gaming. Poker operators are not participants in the games and are indifferent as to the outcome.

“Many Pennsylvania residents participate in illegal and unregulated poker sites,” he added.  “Establishing a strong regulatory framework under the Gaming Control Board will assist in shutting down these illegal sites and enhance consumer protection for our gaming residents.”

Once posted, Bill 1386 is likely to go strong in the Senate, but it will still have to gain approval from the House, before arriving on the desk of Governor Tom Corbett. Facing re-election in coming months, the governor may wish to avoid signing off controversial bills for the time being. However, the argument for online poker regulation in Pennsylvania remains a powerful and convincing one.