Pennsylvania poker rooms raked in approximately $4.9 million in revenue during the month of February. There was virtually no change from the same time period as last year. That means the game of poker isn’t on a downward trend in the Keystone State. 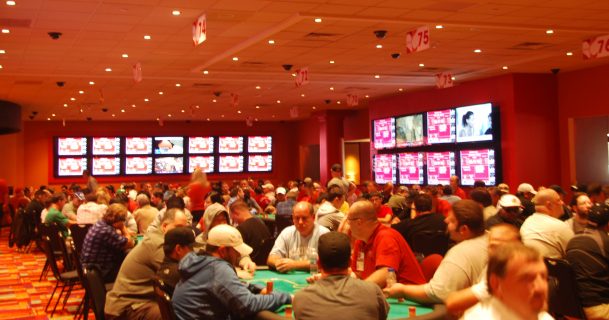 The Parx Casino poker room generates more revenue than any of the other nine Pennsylvania poker rooms. (Image: zazenlife.com)

There are 12 brick-and-mortar casinos in the state, with 10 of them having a poker room. A total of 225 poker tables are placed in those card rooms.

Parx Casino was responsible for nearly one-third of the total revenue (approximately $1.5 million) in February. No casino in the state has more poker tables. Parx has hosted numerous major poker events. Matt Glantz previously held the role of Poker Ambassador for the casino.

Sugar House Casino in Philadelphia raked in $658,000 in revenue last month. The casino boasts one of the top poker rooms in the country. Poker Night in America hosts many live cash games at this location.

The most popular poker room on the western part of the state, The Rivers in Pittsburgh, scooped $557,172 in revenue last month from poker. Other notable Pennsylvania poker rooms include Sands Bethlehem ($887,000) and Penn National ($376,074), according to figures released by the state’s Gaming Control Board.

The poker rooms in Philadelphia compete directly with nearby Atlantic City, the only city in New Jersey with card rooms. Poker rooms are still relatively new in the Keystone State, whereas the industry thrived many years ago in Atlantic City.

Poker is legal in casinos in Pennsylvania, but not online. Many expected that to change last year but the bill never passed. Supporters remain optimistic that internet poker will be legalize by the end of the year.

However, there are some politicians trying to fight the proposed bill. Rep. Tom Murt (R-152nd District) recently proposed a measure that would criminalize online poker in the Keystone State. House Bill 801 would make it illegal for anyone to play online or operate an internet poker site within state boundaries.

That bill hasn’t received as much traction from the Pennsylvania House of Representatives as the pro-online poker legislation which has already passed a key House vote this year.