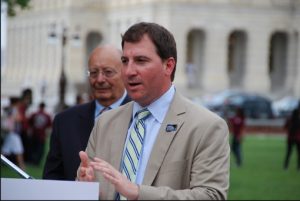 John Pappas, executive director of the PPA, has called on supporters of online poker regulation to contact Pennsylvania senators to make their feelings known. (Image: wickedchopspoker.com)

Pennsylvania’s online poker legislation was passed by a full vote in the State House of Representatives yesterday by a margin of 114 to 85.

The legislation, which would also legalize and regulate online casino games and daily fantasy sports, will now pass to the Senate for consideration. If approved by the Senate, next stop would be the desk of Governor Tom Wolf to be passed into law.

The Poker Players Alliance has launched an action page [HERE], which allows supporters of the legislation to contact Pennsylvania Senators to make their voices heard. The PPA says the site is not limited to Pennsylvania residents alone, although local support will, of course, have more influence.

The level of backing in the Senate is currently unclear, as there has been no companion bill there to help gauge the mood. What is clear is the Republican-majority Senate is desperate to find ways of plugging a whopping budget deficit without raising taxes. Republican resistance to the tax-happy Wolf’s budget plan last year resulted in a nine-month standoff, something lawmakers will be anxious not to repeat.

It also adds urgency. A fiscal note attached to the bill estimates regulation will generate $266.5 million for the state from licensing fees and tax revenues in 2016-17. The bill proposes a tax rate of 14 percent of gross gaming revenue for operators, with a licensing fee of $5 million, with only the state’s current land-based gaming licensees eligible to apply.

Furthermore, the legislation has avoided an amendment that would have also expanded video gaming terminals into bars and taverns, a proposal that was known to be unpopular in the Senate and threatened to sink the whole ship. In fact, without of the defeat of that amendment in the House last week, it’s unlikely the bill would have got this far.

“It is about time,” said John Pappas, executive director of the PPA. “This legislation is long overdue! Pennsylvanians deserve robust consumer protections and today the Pennsylvania House delivered.

“Additionally, this legislation will create jobs and help the Commonwealth close its budget gap. This commonsense legislation is a win-win for Pennsylvania. The online poker community urges the Senate and Governor Wolf to act swiftly to approve this measure.”

If it becomes law, the bill would create an online gaming industry that would offer poker to Pennsylvania’s 12.9 million residents, making it the most populous state by far to regulate. The legislation contains no bad actor language, which means PokerStars could participate in the market and remains open to interstate liquidity sharing. The implications for online poker in the US would be huge.