There are millions of homeless people around the country starving. The Pechanga poker room in Temecula, California has played a small, yet significant, role in helping fix this problem. 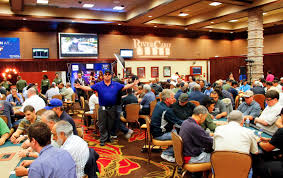 The Pechanga poker room in Temecula, California donated more than 1,000 pounds of food to a local pantry. (Image: rivercard.net)

Poker players in this popular Southern California poker room came together to donate more than 1,000 pounds of food to the Temecula Community Pantry, an area non-profit organization that provides assistance to low-income and homeless families.

Sometimes there are more important things to worry about than stacking chips in a poker room. At Pechanga, helping those in need moved to the top of the list recently.

The charity drive took place during the month of January. The poker room gave its players some added incentives for donating food to help the homeless.

Each player received an extra 1,000 tournament chips for bringing in a non-perishable food item.

“Our poker guests really got into the donations this year,” Poker Room Manager Richie Lopez told MyValleyNews.com. “They felt engaged and it brought them a lot of joy to know they were helping others. That’s the best feeling for us at Pechanga, too.”

With hundreds of people entering tournaments at Pechanga each week, it wasn’t difficult for the poker room to surpass 1,000 pounds of food to donate. The “Restock the Shelves” promotion at the Temecula Pantry helped the organization fill up its shelves after a busy holiday season. Pechanga’s poker room played a significant role in the charity’s successful efforts.

About the Poker Room

Pechanga Casino and Resort is a AAA Four Diamond property in southwest California. The hotel is located northeast of San Diego, and south of top Los Angeles area poker rooms such as Commerce Casino and The Bicycle Club.

The poker room has 54 tables and is open 24 hours a day, seven days a week. Games include daily tournaments and a plethora of low and medium stakes cash games.

Texas hold’em is the most popular poker game at this casino.

Giving Back to the Community

Helping out the needy is important to many poker players, not just at Pechanga. Dan Smith recently finished up his own charity drive.

The poker pro originally committed to matching charity donations up to $175,000. Many poker players, including Doug Polk, gave him no shot of reaching that goal.

He didn’t just reach his goal. He crushed it. Smith, including his contribution, ended up raising $1.7 million after a pair of wealthy businessmen were inspired by his selflessness.

There are many other examples of generosity from the poker world.