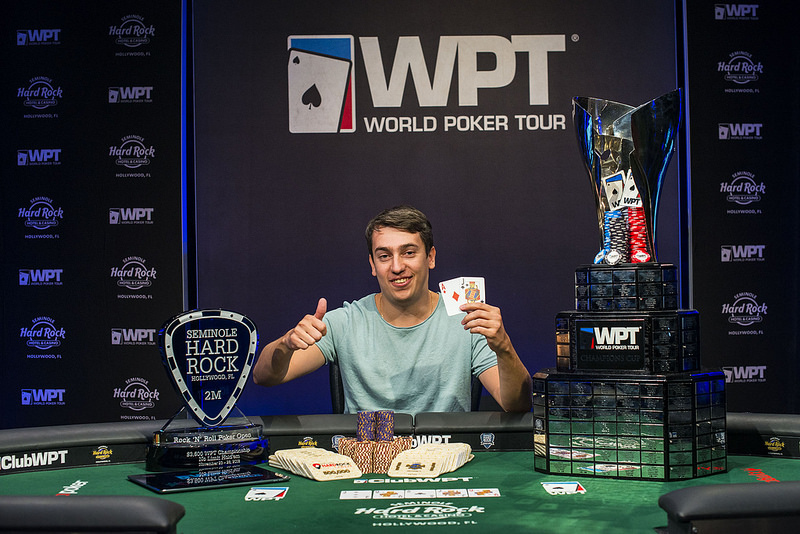 The final session on Wednesday concluded almost exactly how it began. Most players finished in the same spot as they were in when the day began. That’s such a rarity that we here at CardsChat do not recall ever recall that happening in any event we’ve covered.

This tournament began on Black Friday (the Thanksgiving variety) with 898 entries at the Seminole Hard Rock Hotel and Casino in Hollywood, Florida.

Day Five started with Plesuv in the chip lead, followed closely by Jim Gilbert – both big stacks. Marius Gierse, Jeremy Joseph, and Chris Kennedy followed in order behind. And Ravi Raghavan, the lone remaining past WPT champion, was the shortest stack. This is how it ended:

Only Gierse and Joseph switched positions. The rest of the final table concluded exactly how Day Five began. Few major tournament final tables play out in such a manner.

Raghavan entered Wednesday’s session with just 16 big blinds and got it all-in on just the second hand with A-J against Gierse’s A-K. The short stack got no help and was eliminated moments after “shuffle up and deal.”

Kennedy, who had a playable stack at the beginning of the session, also didn’t last long. He busted less than an hour into the session when his top pair (nines) was no match for Joseph’s pocket kings.

At this point, although he hadn’t eliminated anyone, Plesuv increased his chip lead. Then, on the 41st hand of the final table, he finally busted a player, Gierse, by winning a race. And then he busted Joseph with pocket kings against what turned out to be a missed flush draw.

Once heads-up play began, Pavel Plesuv held a 6-1 chip advantage over Jim Gilbert. It’s certainly not impossible to rally from such a deficit. But most of these matches where one player has such a sizable lead are quick and painless. Not this one.

After 20 hands of heads-up play, Gilbert wasn’t making any ground. In fact, he dropped to an 11-1 disadvantage. He just couldn’t find a double-up.

A few hands later he finally found that double-up and then won a couple more small pots. He just, as Teddy KGB from “Rounders” would say, kept hanging around.

Then he dumped some more chips before again doubling up. He refused to go down. It was like watching Rocky Balboa versus Apollo Creed. Well, maybe that’s a stretch.

On the 67th hand of heads-up play, Plesuv won a race to finally put Gilbert out of his misery. Gilbert never came close to catching up.

When saw the photo immediately i remembered him, he is the guy who played heads up vs Isildur some time before also at tournament. Over 500k..Alright, I am starting the grind 😀

Excellent result for Pavel Plesuv, congratulations on a big win. I wish you all more such drifts and success !!!