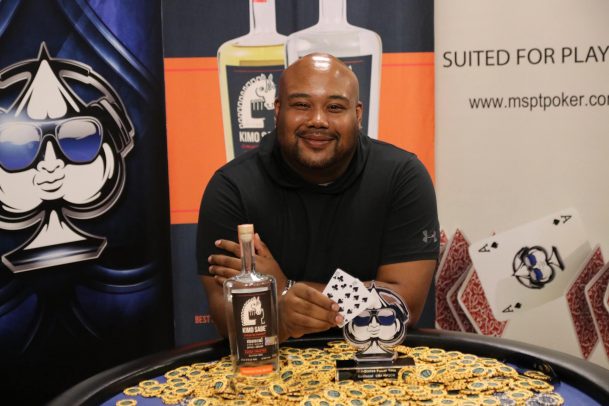 It comes on the heels of July’s 2017 MSPT Iowa State Poker Championship, which drew 496 entrants, a state record for tournaments featuring a $1,000 buy-in or more. Carter Myers won that event for $115,109.

The week before that, the $350 buy-in MSPT Regional Event in Milwaukee’s Potawatomi Casino attracted 1,658 runners in three flights, which made it the largest poker tournament ever held in Wisconsin. The previous record was 1,272 entries set by the World Series of Poker Circuit in four flights back in February. Local attorney Matthew Vignali took home $70,240 for winning that event.

Topping it all off, the summer’s MSPT Venetian, which catered to 3,273 entries, became the largest poker tournament in both MSPT and Venetian history.

Fittingly, Paul Cross, a 32-year-old finance manager at Thomas Reuters, took down the title for $61,911. Cross is a well-known recreational player in the Minnesota poker scene, so winning such a prestigious event meant a lot.

“It’s humbling and overwhelming,” Cross told MSPT officials after the win. “I actually got pretty emotional. I have been grinding these tournaments for a long time and have made a few final tables, but a MSPT final table was a big goal for me. It is the most prestigious tour that comes through Minnesota. So, to make my first and go on the heater of a lifetime was unbelievable.”

In the final hand of the tournament, MSPT Season 7 Meskwaki champ Heine got his short stack all in preflop holding the K♣4♣ against the 10♣10♠ of Cross. The 10♥9♥7♣ gave Cross top set, and Heine was drawing dead after the 4♠ appeared on the turn.

The silver lining for Heine, who earned $37,988 for his runner-up finish, was that he received 567 points toward the Kimo Sabe Mezcal MSPT Season 8 Player of the Year Leaderboard. Thanks to two other final table finishes earlier in the year, he now sits in first place with 2,767 points with his next closest competitor being Keith Block with 2,500 points.

“Keith just gets it,” Cross said of his heads-up opponent. “He is an inventive poker player that likes to talk and I love that. I had never played him with him before and I was really impressed. It was a great match which is something you don’t get to do often.”

Season 8 of the MSPT continues next weekend with the 2017 Indiana State Poker Championship at Tropicana Evansville.