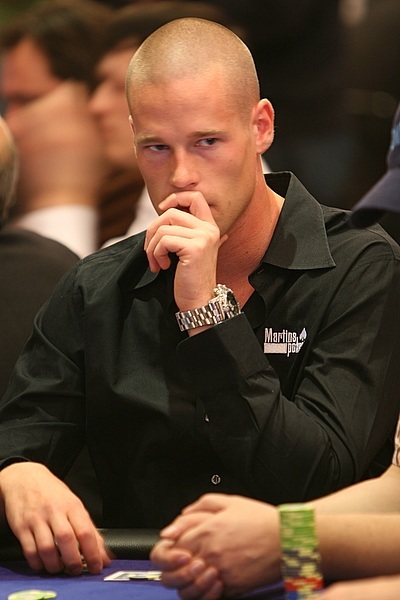 Patrik Antonius is playing more live poker now, and blames player-assistance software for his absence at the high-stakes games online. “I‘ve never used technology to get an edge,” he says. (Image: pokergurublog.com)

Finnish-born poker pro Patrik Antonius has hit out at the prevalence of tracking software in online poker, and says he blames the player-assistance technology for his withdrawal from the online nosebleed games.

Speaking to PokerListings.com, Antonius, who pre-Black Friday was one of the most dominant forces in online poker, said that software has changed the high-stakes game unrecognizably.

“You know, it’s a little sad, but it looks like the technology has advanced so much that it’s become a totally different game,” he said. “Nowadays players use software that gives them so much information and so much data that it has become more of a game of numbers.

“I never used any of these programs,” he continued. “I‘ve never used technology to get an edge. I’m more of a feel player who’s living in the moment. But the players today know what they’re doing.

“They are basing their play on what the software tells them to do so it feels like you’re playing against a computer these days. Software has changed the high-stakes game. If you don’t use poker software it’s not a fair game anymore.”

Antonius added that while he still plays the mixed games online, he now prefers to concentrate mainly on live poker. After losing a million dollars, he received a wake-up call, he said, and realized he could no longer beat the software.

PokerStars recently moved to ban controversial heads-up sit-n-go software that was being used by a handful of players at the high-stakes tables. Having initially approved the use of these programs by players, the online poker giant was forced to reconsider its position following an outcry from many on the poker forums.

Ultimately, it decided that these programs were essentially able to “replicate the utility of a complex bot in a chart format,” and that the “cost of leaving this software allowable is too high.”

The incident has prompted the poker site to reconsider its terms and conditions, and to contemplate limiting the use of more prevalent assistance software programs, such as HUDs.

It’s not just the high stakes games that have been changed by poker tracking software, however. The online poker industry has struggled for many years with a lack of recreational “Joe Average” players, who are, after all, poker’s bottom line, and mostly embracing the lower stakes games.

Many feel that tracking software is to blame, as it allows good players to multi-table at lower limits, grinding out volume at these stakes in a way that would not be profitable otherwise. The result is that the skill gap between new players and the rest of the (more experienced) pool is greater than it has ever been.

Sites like PokerStars are faced with a difficult dilemma, of course. They can accept those using software to grind volume, which generates a lot of rake but may alienate newbies, or make revolutionary changes aimed at embracing recreational players.

PokerStars has hinted that it has decided to take the latter option.

“I want to make completely clear that we are headed firmly toward further restrictions on third-party software in the future,” said a PokerStars spokesman recetly. “There is a meaningful probability that within the next year or two our policies will be significantly more restrictive.”

I think it’d be great if they just got rid of all of it.

I agree, all should be banned. People should just take notes on notepad, or on a notebook. The old fashioned way or no way. Why did some software geeks change the face of a game?

Patrik Antonius is 2nd on the list of biggest poker winners tracked by HighstakesDB. The data is based on 500017 hands played and his total cash game profits amount to $11,315,549. Patrick admits, that the WSOP is more of a cash game thing for him. Patrick has also won large sums of live games, only he knows the exact amount.