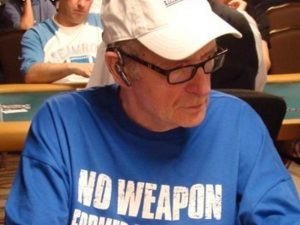 The poker community recently learned of the losses of two poker players who made history in the game. Danny Robison was best friends with Chip Reese and a World Series of Poker bracelet winner, and Starla Brodie was a two-time WSOP champion and one of the few women to play tournament poker in the 1970s and early 1980s.

Many people in the poker world learned of the passing of Danny Robison through Doyle Brunson’s Twitter account. On April 7, he tweeted, “Got word Danny Robinson (sic) just died. He was Chip Reese’s best friend and was instrumental in poker development in Vegas. #myfriendtooRIP” And he then added that Danny had a tough life of drugs, but did manage to “kick them.”

Originally from Dayton, Ohio, Robison traveled to Las Vegas with friend Chip Reese in 1973, and they won enough money playing live poker that they stayed. The two played $10/$20 Seven-Card Stud at the Stardust in shifts and turned their original $800 investment into about $2 million. Due to their ongoing presence at the Stardust, they became known as the “Golddust Twins.”

The late Tom Sexton wrote about Robison and the friendship he had with Tom’s brother, Mike Sexton. He also detailed some of Robison’s qualities, such as the ability to “psych out his opponent and keep him off-balance while gambling at anything, even coin-tossing.” Sexton described the former golf and basketball star in high school and college as charming, smart, and prone to partying.

Robison experienced a downswing at one point with a drug addiction, though he ended up completing a successful rehabilitation stint and becoming a born-again Christian. He also married and had two children. He continued playing poker, usually in Stud cash games at the highest stakes in Southern California card rooms like the Commerce and Bicycle casinos, and Hustler.

As for Robison’s tournament accolades, he won the 1979 $2,500 buy-in Seven-Card Stud Hi/Lo Split title at the WSOP and the 1995 $2,500 Seven-Card Stud bracelet. He also made numerous final tables in Stud and Razz events, but most who played with him considered him the best cash game Seven-Card Stud player in the world.

Linda Johnson revealed in a blog post that Starla Brodie passed away recently. “There weren’t a lot of women playing poker when I first started,” Linda wrote. “Starla welcomed me and others into the poker world and made us feel comfortable. I wish I had properly thanked her while she was alive.”

Brodie hailed from Verona, New Jersey, and always enjoyed the art of the gamble. In her early career, she traded options at Philadelphia Trading, claiming to have made $400,000 in one year before taxes. She and husband Ken traveled to play poker and enjoyed Las Vegas.

The World Series of Poker was the place for serious tournament poker players in the 1970s, though she also traveled the world for the occasional good tournament. It was in Las Vegas that Johnson met Brodie, who inspired Johnson to compete in the 1980 WSOP and then play the game professionally, which she has done ever since.

Brodie made history for women in poker by becoming the first woman to win two WSOP bracelets. She won her first in 1979 in the $600 buy-in Mixed Doubles tournament, which she played with partner Doyle Brunson. She then won the $1,000 Women’s Seven-Card Stud event at the 1995 WSOP, after having played it for 18 years. “I’m thrilled to finally win it,” she said at the time.

Since then, she made the final table of the WSOP Women’s Stud event again in 1998 and 1999, and she finished 11th in the 2001 Women’s Championship. She continued to play poker in tournaments and cash games, enjoying the game always.