The Partypoker Live Millions Grand Final Barcelona proved to be one of the biggest poker festivals of the year thus far. It was chock full of big-name players taking down titles, such as Sam Greenwood and Jake Schindler, so it was only fitting the Main Event was a star-studded affair. 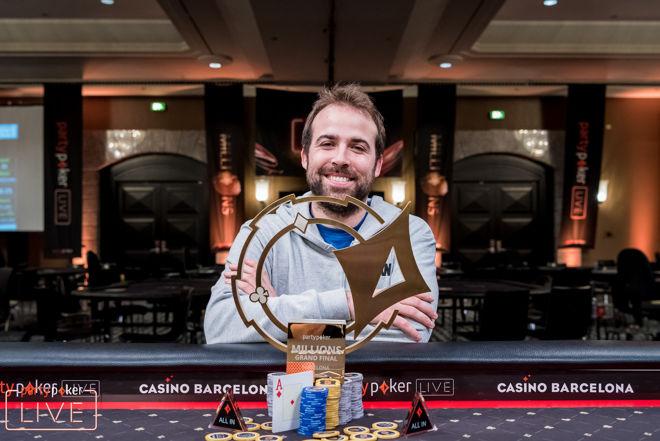 By winning more than $2 million in Barcelona, Pascal Lefrancois leapfrogged players such as Andrew Chen and Griffin Benger to move into 13th place on Canada’s all-time money list. (Image: Partypoker)

Of those, Boivin was the first to go after getting it in with the A♥3♥ and failing to get there against Chidwick’s J♣J♦. Not long after, Kitai got unlucky with his A♠J♦ when Diogo Veiga paired his kicker holding the A♥4♣.

As for Nitsche, action folded to him in the small blind and he jammed his last nine big blinds holding the K♠6♣ and Lefrancois called with the K♦3♣. The board ran out 10♠4♠2♣5♣A♣ and Lefrancois made a wheel to run over the young German. Nitsche took home €800,000 ($986,923) for finishing in fourth place.

Three-handed play was comprised of Lefrancois, Owens, and Chidwick, who was fresh off finishing runner-up to Jake Schindler in the Super High Roller. Chidwick busted in third place for €1,000,000 ($1,233,654), which was his third seven-figure score in three weeks. He didn’t have any before that.

Chidwick busted after he jammed his last 12 big blinds from the big blind over Lefrancois’ button limp. The Canadian called with the K♠10♠ which was behind Chidwick’s A♥7♣. However, the board ran out K♥9♠8♦5♦8♣ and Lefrancois made two pair to bust Chidwick.

“I just try to think about the cards and the decisions, not about the outcome,” Chidwick said after his elimination.

I want to dedicate [this run] to my granddad, who is probably the biggest gamer in my family. If I hadn’t grown up playing card games and board games, and even video games with him, then I maybe wouldn’t be here now.”

That left Lefrancois with a near 2/1 chip lead over Owen, but it’d take a couple levels for this to finish. In the final hand, Owen four-bet jammed with the A♠10♠ only to run it into the A♦J♦ of Chidwick. The Q♣5♣5♦ put some chop outs on the board, but both the 3♠ turn and 7♦ river were blanks.

“It has been exhausting, an exhausting four days especially with the two flights on Day 1,” the 31-year-old Lefrancois told Partypoker officials after his win. “I tried to keep my focus even though I was pretty tired. It is really sick. You see these events and you just don’t think you can win.”

The next big Partypoker Live event is the Millions North America, which is coming up in May at the Playground Poker Club.

Well done to Pascal. He is a good aggressive player been around quite a while so I am happy to see him have success and take down a big tourney. I remember first seeing him in 2010 WSOP main event he had deep run had a pile of chips late but lost his way with two tables left. His counrty man J. Duhamel ended up winning that event.

Great score for Pascal. Chidwick seems to be on a roll aswell, but the fact that I see him at FT’s may be because the HR events are such a small field. Impressive regardless of field size. Also always nice to see Davidi Kitai up there, one of my favourite players 🙂