Partypoker is giving its live-online hybrid innovation a second outing later this month with the UK Championship.

Partypoker is expecting a large turnout at Nottingham’s Dusk Till Dawn casino for its upcoming UK Poker Championship. (Image: partypoker.fr)

Partypoker embraced the post-COVID carryover of hosting things online, turning its Malta series into a crossover event. An initial selection of Malta Championship MTTs took place on Partypoker from March 17 to 31.

The action then crossed over to a live setting with the final run of events currently taking place at Malta’s Portomaso Casino until April 4. Building on this, Partypoker announced this week that it will use the same hybrid format for its UK Championship.

The UK Championship gets underway on April 16. A selection of as-yet-unannounced MTTs will take place on Partypoker before the online leg concludes on April 28 with Day 1A of the £600 ($790) main event. From there, the series will move to Nottingham’s Dusk Till Dawn. Like the online portion of the series, the £500,000 ($660,000) guaranteed main event will be flanked by a selection of side events that will run until May 2.

Partypoker has yet to finalize the full line-up of tournaments, but this week’s announcement confirmed that there will be a mix of high and low buy-in events, as well as satellites starting at $0.01.

Dusk Till Dawn owner Rob Yong will be in attendance, as should many of the UK’s circuit regulars. However, given that 50% of the festival will take place online, UK Championship titles could be won by anyone on Partypoker’s dot.com network. 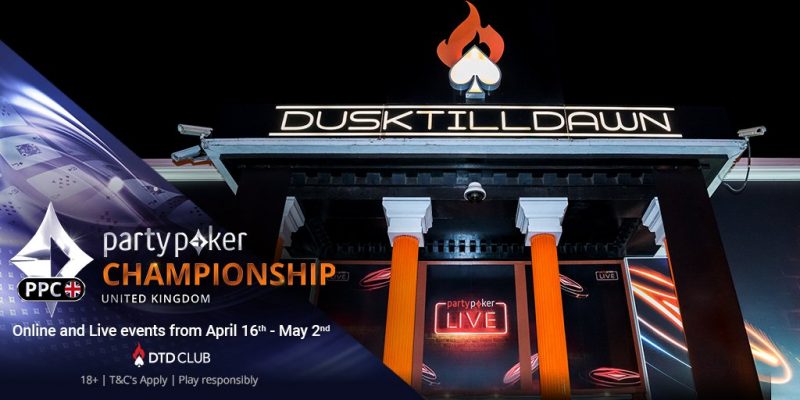 Hosting a full tournament series both online and live may seem like an obvious idea given that Partypoker has a footing in both worlds. However, the format has only started to gain traction after a two-year pandemic.

With poker players now conditioned to playing high-profile tournaments such as the WSOP Main Event online, organizers believe the time is right to innovate. Partypoker has taken the lead and the UK Championship will be another chance to see if hybrid tournaments strike the right balance between convenience and entertainment.