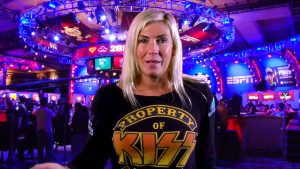 Partypoker has added some more firepower to its pro roster with the signing of influential female pro Jackie Glazier.

In something of a reaction to the spate of non-poker player sponsorship deals hitting the headlines in recent months, partypoker has drafted in the services of Glazier to boost their live presence.

Throughout 2105 and 2016 the predominant theme among online poker operators has been: “attract casual players with familiar faces.”

As part of this marketing strategy, soccer stars like Cristiano Ronaldo and Neymar Jr have been used by PokerStars to take poker into the mainstream and attract new players.

Giving Players a Reason to Play

While this has certainly proved effective for the game in a wider sense, there is always a need for professional level players. As important as it is to bring fresh blood into the industry, operators also need to find a way to keep them playing and one of the most effective ways to do this is to give them something to aspire to.

This model is one that poker sites have used since the early poker boom, but over the last few months it appears to have been lost in favor of celebrity endorsement deals.

Wanting to buck this trend, partypoker has recruited Glazier and will now use her poker credentials to inspire those who have recently taken up poker.

With $1.3 million in live tournament winnings, a WSOPE bracelet and Australian heritage, Glazier is perfectly placed to promote the game in her native Oz as well as neighboring Asia. Indeed, despite regulatory stumbling blocks hampering the progress of poker across Asia (especially in China), it still offers a significant investment opportunity for operators.

A Chance for Glazier to Shine

Of course, there’s also the added value of Glazier being a female player. As important as it has been to encourage novices to ante-up online, bringing more women into the game has also been a major focus for operators. Successful pros like Vanessa Selbst, Liv Boeree and Vanessa Rousso have helped raised the profile of women in the game and Glazier is now in a position to carry on this work.

“Feeling so much love since joining @partypoker Thanks to every1 that sent congrats and thanks to the partypoker team for such a warm welcome,” tweeted Glazier.

In addition to playing on partypoker under the moniker “JACKSTARPARTY,” Glazier will participate in various live events, including the partypoker sponsored WPT Caribbean and partypoker Million. On top of these duties, Glazier will help her new sponsor to reach “grass-roots” players and promote various innovations in the virtual arena.

Thanks for the write up Cardschat and Daniel!