While PokerStars seems to be bleeding sponsored pros (Jason Mercier was the latest to part ways), Partypoker seems to be engaged in an arms race with both 888poker and Winamax to sign the brightest young guns in the game. 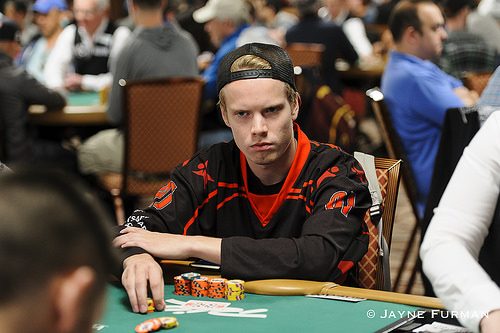 Joni Jouhkimainen may not be as big a name as either Fedor Holz or Jason Koon, both of who recently signed with Partypoker, but that hasn’t stopped the 26-year-old Finnish poker pro from getting a patch deal.

“I’m really happy to be joining team Partypoker,” Jouhkimainen said. “All the efforts that Partypoker has been making recently to put players first have made me, and many others, really happy.”

Since he turned 18 and started traveling the live poker circuit, Jouhkimainen, who has been devoting more of time to pot-limit Omaha lately, has amassed nearly $2.5 million in tournament earnings, which puts him sixth on Finland’s all-time poker money list behind the likes of Juha Helppi, Patrik Antonius, and Jens Kyllönen.

Jouhkimainen’s first big score came when he was just 18-and-a-half. That is when finished sixth in the Italian Poker Tour Season 1 Sanremo for $31,783. In September 2013, he placed fourth in the EPT10 Barcelona High Roller for $197,977, but his biggest score to date came at the same stop the year before. In a field of 1,082 players, Jouhkimainen placed third, behind Ilari Sahamies and Mikalai Pobal, in the EPT9 Barcelona Main Event, which paid $496,436.

More recently, in December, he took fourth at the Partypoker LIVE Nordic Poker Championships in Prague for €70,000.

“It was nice to start off my relationship with partypoker with a great result at the Nordic Poker Championships in Prague, especially as Prague is one of my favorite poker stops every year,” he said of the score.

In other Partypoker news, they will be debuting the new season of Partypoker LIVE February 24 through March 4 in Punta del Este, Uruguay.

The first-ever Latin American Poker Championships will feature $2,000,000 in guaranteed prize pools, half of which has been slapped onto the $1,100 Main Event.

“Poker has taken off in Latin America in a major way in recent years so it’s a very exciting time to be playing there,” Partypoker LIVE president John Duthie said. “I’m delighted that we are hosting another event in the region, especially somewhere like Punta del Este which is such a fabulous destination.”

Indeed, Punta del Este has a rich history when it comes to poker, especially on PokerStars’ Latin American Poker Tour. Among those who’ve won titles there include former PokerStars Team Pro Jose “Nacho” Barbero, Norway’s Karl Hevroy, and American Carter Gill, who went on to be the brunt of a bad beat that went viral.

Among the Partypoker pros who’ll be attending the Latin American Poker Championships are Brazilian Joao Simao and Argentinean Richard Dubini.

Strong. So young. I would like to know where he studied poker. What literature studied?